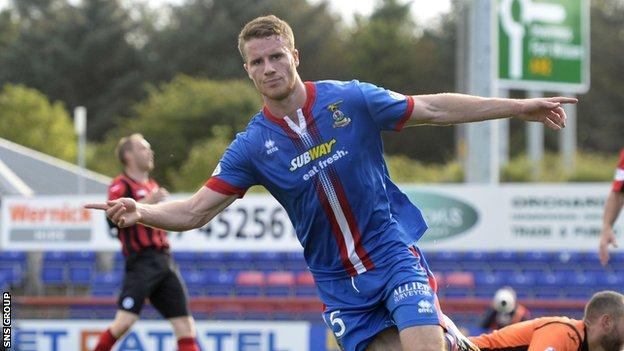 Manager John Hughes was delighted to see patience rewarded as Inverness returned to the top of the Premiership.

The hosts dominated for long spells against St Johnstone but had to wait for an hour to break the deadlock in a 2-1 victory.

"We're really calculated in everything we do at Inverness and that was evident today," Hughes told BBC Scotland.

"Everyone gets a touch, we move teams around well and we had good ball retention."

The visitors responded with a goal from Brian Graham 12 minutes from time to ensure a tense finale.

"It was important to get back to winning ways," added Hughes, who had seen his side lose to Partick Thistle last weekend and exit the League Cup at Ibrox.

"We put a lot into Tuesday's game against Rangers and we were a little concerned there might be some fatigue.

"But we were very good and created chances in the first half and I was thinking 'not one of these days'.

"It came for us in the second half and Marley Watkins came up with a sublime finish. Usain Bolt would struggle to keep up, he's that quick!

"Then young Christie showed his quality again and we were delighted when he came up trumps with the second goal.

"We always find it tough against St Johnstone. There's not much between the teams.

"My only disappointment is conceding a goal. At 2-0, with our style, we should have been playing keep-ball."