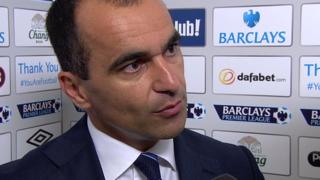 Everton boss Roberto Martinez says giving away a "cheap" penalty was the "key moment" as his side were beaten 3-2 by Crystal Palace at Goodison Park.

Romelu Lukaku fired in for Everton but Palace equalised through a Mile Jedinak penalty before Fraizer Campbell's header and Yannick Bolasie's low shot put them in control and a Leighton Baines penalty gave Everton hope but Palace held on for the win.

Everton have won only three of their last 10 games but Martinez insists the Toffees' squad is big enough to cope with the rigours of balancing Premier League and Europa League competition.