MOTD2 pundit Danny Murphy expands on his TV analysis of Manchester United's defensive problems in their 5-3 defeat by Leicester City.

Manchester United conceded four goals in the space of 21 second-half minutes in their disastrous defeat by Leicester but it was not their collapse that concerned me the most - it was the fact they looked so vulnerable throughout the whole game.

What went so wrong? Well, United's defence lacked leadership, experience and quality. But if I criticise them, then it is also important that I point out they did not have much protection.

The balance of the team was all wrong. We already knew Louis van Gaal's squad was top-heavy with superb attacking talent but this game was the first time we have seen that it does not matter how dangerous they are going forward if they cannot defend.

At times, they were simply all over the place.

You cannot tell me that they did not have the better players - if you compared the two teams on paper, United should have won the game. 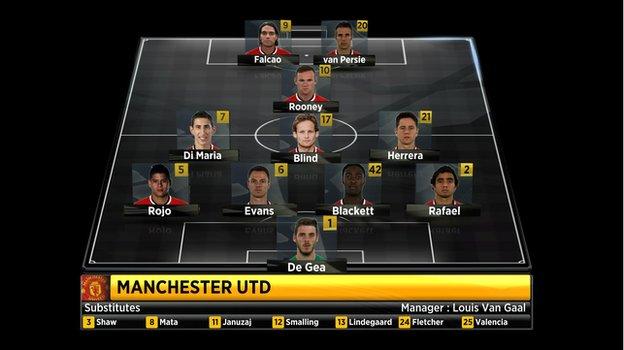 But, tactically, United were naïve.

That, on top of the inexperience of some of their players, combined to make them so bad at the back that, every time Leicester went forward in the second half, it felt like they could have scored.

Leicester should never have got the penalty that led to their second goal, and that clearly ended up being a big boost for them. Even so, there is no excuse for United conceding three more.

They were still 3-2 up with less than half an hour remaining and, although they were under pressure, the game should still have been in their control. Instead, they were nervous.

When you are in that situation, leadership matters. I am talking about somebody at the back organising things - telling a couple of midfielders to sit in front of the defence and saying "stay there and don't move".

In the past, Rio Ferdinand and Nemanja Vidic have been that voice, but they have gone and not been replaced.

Instead, against Leicester, United had 20-year-old Tyler Blackett at the heart of their defence. He is learning his trade and was never going to provide that kind of authority.

When you are a young lad in a back four, you need help from all around you but because of the number of attack-minded players that United had on the pitch, that did not happen. The Leicester players were given far too much space.

I can understand why it happened, because it is hard for players who are forward-thinking to change their mentality and dig in. Too many of United's players have that mind-set.

If you look at United's formation, they again set up in the diamond they used in their win over QPR last weekend. 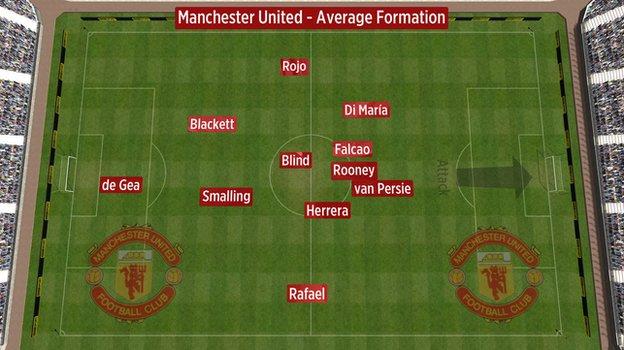 Daley Blind was sitting in front of the defence but he was really the only one protecting it, because in front of him he had Angel Di Maria flying up the pitch, Ander Herrera who is also forward-thinking and then Wayne Rooney who was behind the two strikers.

Blind got lots of praise this week for the way he shielded the defence against QPR and set the tempo with his passing - but that was a completely different game where the opposition did not have a go at attacking United, or see very much of the ball. So the Dutchman did not have to defend very much.

This time, with the pace and energy of Leicester, plus the number of players they pushed forward, the game by-passed him a little bit.

Blind was trying his best and he is clearly a good player but, when you are isolated like he was, then playing as a holding midfielder is really tough. You just cannot cover the width of the pitch on your own.

United were left even more exposed when their full-backs, Marcos Rojo and Rafael, pushed up into Leicester's half, something they both tried to do. 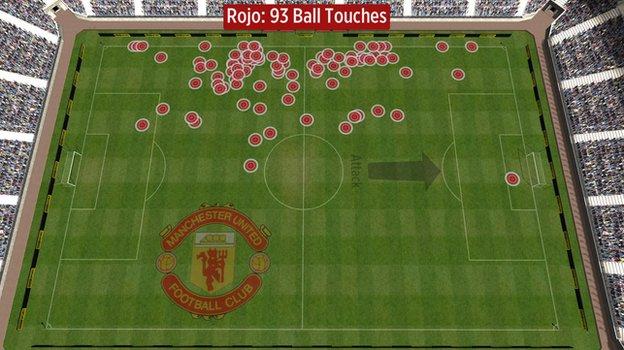 Rojo is still adapting to the English game and I felt he struggled against the Foxes.

For the home side's fourth goal, he was caught out of position after pushing on past Juan Mata, who was then caught in possession, allowing Leicester to break and score.

Rojo had played a bad ball to Mata, who had a man arriving quickly to close him down, but my point is more that full-backs should not overlap unless their team are in safe possession.

It was a poor decision by the Argentina international, and it was not the only time it happened. Again, that comes down to inexperience.

United play Chelsea and Manchester City in a few weeks and, when they do, Van Gaal could try again at being as open as his side were against Leicester.

From what we saw against Leicester, United have got a long way to go before they are challenging for the title again

But what happened against the Foxes showed how much of a gamble that would be.

If United want to challenge against the top sides then they have to look at changing their system or their personnel.

I am not sure they have other defenders in their squad who could make a massive difference because, if you look at the players missing on Sunday, you could really only argue that £27m summer signing Luke Shaw should be given a chance now, and that Phil Jones would play if he is fit. But that is it.

So a change in system is probably more realistic. We have already seen Van Gaal change from playing with three at the back, which is how he started the season, and he will continue to try to find the right balance with the players he has got.

Playing another holding midfielder would give the back four more protection but that gives him the problem of fitting in all of his big-name attackers. In the last two games we have seen how much quality they now have going forward.

Something has to give, though, otherwise this sort of defeat will happen again.

From what we saw against Leicester, United have got a long way to go before they are challenging for the title again, and it is going to be a scrap for them to get into the top four.

Fearless Foxes get their reward

I have spoken about how bad United were defensively but Leicester deserve credit too. They showed great energy and discipline and never sat back or gave up. 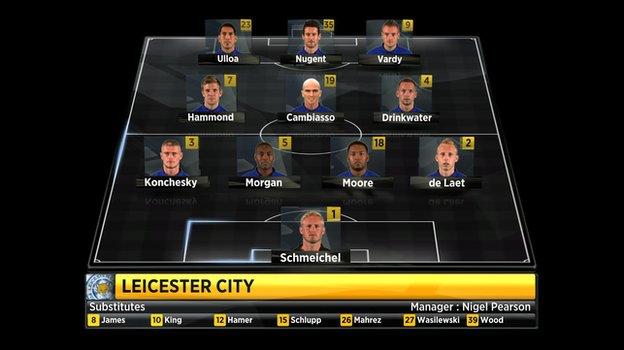 Just as he did against Arsenal and Everton, Foxes boss Nigel Pearson was brave enough to have a go against United, matched his team up to them man-to-man, and decided to let his full-backs go up against theirs.

It was bold, especially when they were 3-1 down, but it worked. They got the ball forward quickly in the channels for Jamie Vardy and Leonardo Ulloa, who caused United's defence all sorts of problems.

To try to cope with Leicester's front three, United's back four were crossing over each other so that their centre-halves were in the full-back position and vice-versa. 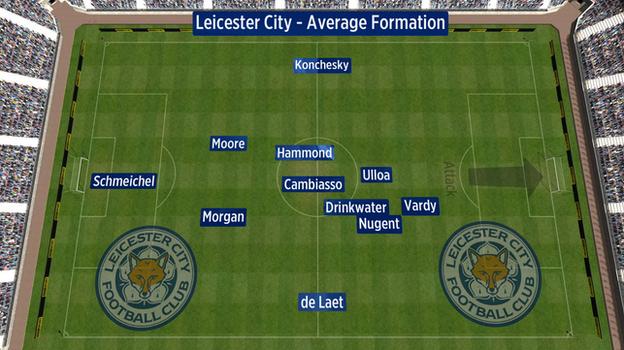 Vardy epitomised what the whole Leicester side was about, with his display of commitment and passion.

I played against him a couple of seasons ago when he had just joined Leicester from Fleetwood and the thing I remembered about him was his relentless energy.

When I saw him on the team-sheet for the United game, I said, "he will not stop running" and he didn't.

The question mark over him was the same one you ask of all strikers who come from the lower leagues, which is whether he had the quality to score goals in the Premier League. Against United he proved that he does. 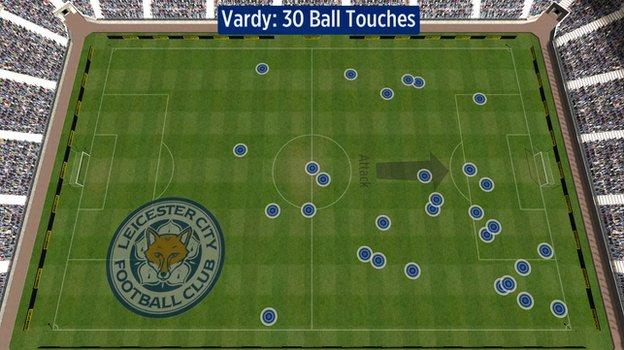 Vardy again showed his brilliant work ethic but he had an end-product too, starting with the cross for Leicester's first goal.

Fairly or not, he used his strength to eventually get the penalty for their second goal, and won a second spot-kick too.

But his best moment was his goal, when he ran clear and showed great composure with a really calm finish against a top-quality keeper in David de Gea.

It is only three years since Vardy was playing for Halifax in the Northern Premier League and his progress to making his Premier League debut against United is a wonderful story.

To me, it looked like he had been playing at this level for years and, if he carries on playing with the same commitment, he is going to score a lot more goals.