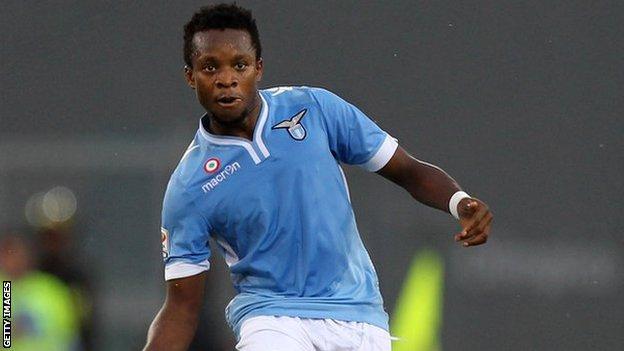 Nigeria's Ogenyi Onazi has signed a two-year contract extension with Italian Serie A club Lazio until 2018.

"I give God the glory and special thanks to everyone involved in sorting out this new deal," the 21-year-old told BBC Sport.

"It's important to know that your future at the club is sorted; I've always insisted that I love it here and I'm delighted to stay."

In August the Italian club said they would listen to offers for Onazi as he and his representatives pushed for a better pay deal or for the club to lower their valuation of him.

"My focus and desire is to give my best in the club colours and continue to enjoy the love and warmth of our fans," he continued.

"As a young footballer you learn every day, work tirelessly and seek to improve. I have the players, staff and the needed support to grow here."

Onazi was the subject of transfer enquiries from English Premier League trio Everton, Southampton and Sunderland in the summer transfer window.

There was also interest from German, French, Spanish and Russian clubs but the Italian side refused to sanction the sale of the Nigerian international.

He originally joined Lazio in 2011 from Nigerian amateur side My People FC and has scored four goals in 69 senior appearances for the Biancocelesti.

After representing Nigeria at youth level, the defensive midfielder has enjoyed a meteoric rise over the last few years since making his senior debut in October 2012.

He played in all four of Nigeria's games at the World Cup in Brazil and has now recovered from the injury he suffered against France in the last 16 that saw him leave the stadium in a wheelchair.

As well as winning the 2013 Africa Cup of Nations, Onazi has made a total of 24 appearances for the African champions and scored once.