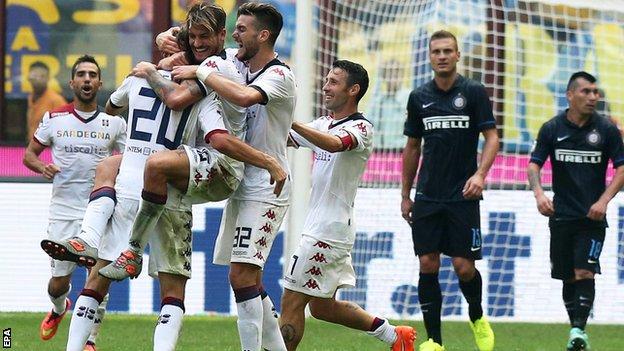 Inter Milan suffered a humiliating first Serie A defeat of the season as they were thumped by bottom club Cagliari at the San Siro.

Inter were reduced to 10 men when captain Yuto Nagatomo was sent off for picking up his second yellow card.

Cagliari, who had taken one point from their opening four games, eased to victory through Albin Ekdal's treble.

The Swedish striker, who had only scored three times in 77 previous appearances for Cagliari, doubled his tally for the club with a 15-minute hat trick.

The scoreline could have been worse for Inter, who saw goalkeeper Samir Handanovic save a first-half penalty from Andrea Cossu when the score was still 3-1.

Former Manchester United defender Nemanja Vidic, who joined Inter in the summer, conceded the spot-kick with a clumsy foul.

Cagliari had lost their previous three matches but moved up to 13th with the win.