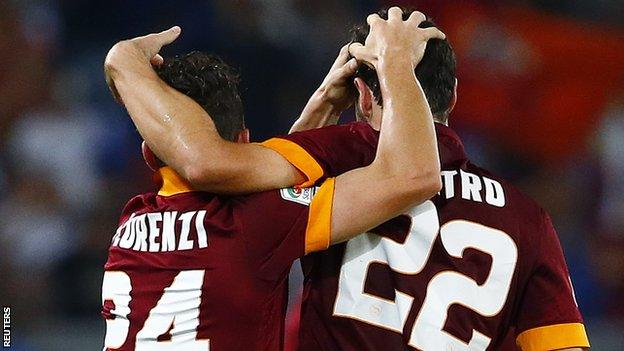 Roma midfielder Mattia Destro scored a stunning goal from close to the halfway line as the Giallorossi maintained their 100% start in Serie A.

Destro controlled team-mate Morgan De Sanctis's goal kick before smashing in a half volley from more than 40 yards.

That secured Roma's fifth straight win after substitute Alessandro Florenzi fired into the bottom corner for the opening goal.

Juventus, who beat Atalanta later on Saturday, are top on goal difference.

Roma skipper Francesco Totti marked his 38th birthday by starting for Rudi Garcia's men and there was a party atmosphere inside the Stadio Olimpico as supporters sent their best wishes to their talismanic captain.

But Totti, who has scored 235 times in 21 seasons at the club, was unable to celebrate the occasion with a goal.

On the half-hour mark, he slid a loose ball towards goal but Verona defender Frederik Sorensen scrambled back to clear off the line.

The former Italy international also went close immediately after the break when Verona's teenage goalkeeper Pierluigi Gollini tipped his effort over the bar.

Sixth-placed Verona looked set to frustrate Roma until Florenzi and Destro broke through in the final quarter of an hour.

Roma travel to Juventus in a top-of-the-table clash next weekend.