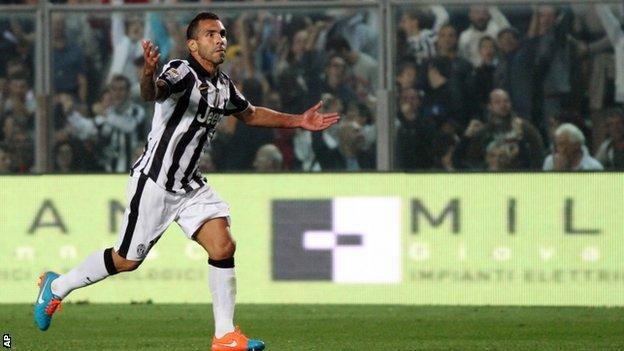 Carlos Tevez scored twice as defending champions Juventus beat Atalanta to record their fifth straight win at the start of the Serie A season.

The Argentine put Juve ahead when he poked in Stephan Lichtsteiner's cross.

Atalanta wasted a chance to equalise when German Denis' weak penalty was saved by Gianluigi Buffon and, within a minute, Juve were 2-0 in front when Tevez drove a low shot inside the post.

Juventus are top of the league on goal difference from Roma, who defeated Verona 2-0 to maintain their 100% start to the campaign.

The top two meet in an appetising encounter in Turin next weekend.

Atalanta, in contrast, have just four points from five games and could be facing a long battle for survival.

They will rue the opportunity that went begging after 58 minutes when Juve defender Giorgio Chiellini clumsily brought down substitute Salvatore Molina in the box.

Denis, however, telegraphed where he was going to aim his strike, allowing Buffon to palm the ball away.

In one sweeping break, Juventus had sealed the points as Tevez drilled in a low shot for his sixth goal of the season.

With seven minutes remaining, Morata added the gloass with his first goal since his £15m switch from Real Madrid.

The Spaniard rose at the far post to head home a cross from his fellow substitute Roberto Pereyra.

Juve face Spanish champions Atletico in the Champions League on Wednesday before returning home for the showdown with Roma.