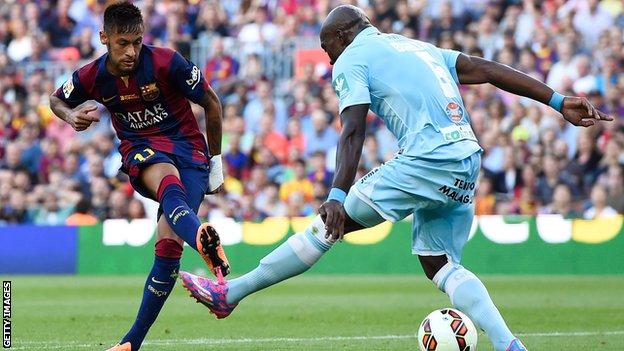 Barcelona's impressive start to the La Liga season continued as Neymar's hat-trick helped them to demolish a poor Granada side at the Nou Camp.

The Brazilian tucked in with the aid of a deflection, before two quick goals effectively sealed Granada's fate.

Ivan Rakitic glanced in Lionel Messi's cross and Neymar pounced on a loose ball as Barca led 3-0 at half-time.

Neymar's third of the game was sandwiched by Messi's 400th and 401st career goals as Barca went top.

The comfortable victory was further evidence of Barcelona's impressive revival under new boss Luis Enrique, who took over from Argentine coach Tata Martino in the summer.

The former Barca midfielder, who made over 300 appearances between 1996 and 2004, has been tasked with bringing glory back to the Catalan club after a trophyless campaign under Martino.

Barca finished second in La Liga after champions Atletico Madrid earned a final-day draw at the Nou Camp, meaning they did not win a competition in a single season for the first time since 2008.

Martino's side were accused by some critics of not playing in the attractive style expected by Barca fans and Enrique has remedied that by creating an attacking blend which has plundered 16 goals in six La Liga matches this season.

His team did fire a blank in a lacklustre goalless draw at Malaga in midweek, but they responded in fine fashion in front of their own fans.

Led by Messi and Neymar, Barca produced a sparkling offensive play which ran mid-table Granada ragged. And their defensive play was equally assured as they continued their remarkable record of not conceding a single goal in La Liga this season.

After a promising start, the visitors became the architects of their own downfall as a sloppy pass led to the first goal.

Neymar pounced on a loose ball from Granada midfielder Hector Yuste before seeing his low shot loop fortuitously off a defender and into the away net.

That allowed the home side to settle down and find their rhythm, with the double strike shortly before half-time putting them in command.

Messi skipped to the right byeline and clipped a cross into the middle where Croatia midfielder Rakitic was waiting to nod in.

Less than three minutes later, the Argentina captain was instrumental again. He fed a precise ball towards teenage attacker Munir, who was beaten to it by Granada keeper Roberto, only for the rebound to fall kindly for Neymar to tuck in.

Barcelona controlled possession after the break as Granada attempted to limit the damage, and added a fourth with a wonderful team goal. Xavi's raking pass was volleyed first time across the Granada goal by right-back Dani Alves and Messi headed in.

Neymar collected the Argentine's pass to become the first Brazilian to score a La Liga hat-trick for Barcelona since Rivaldo against Valencia in 2001, before Messi dispossessed a Granada defender to calmly slot in the sixth.

The comfortable victory moved them ahead of Valencia, who play Real Sociedad on Sunday.