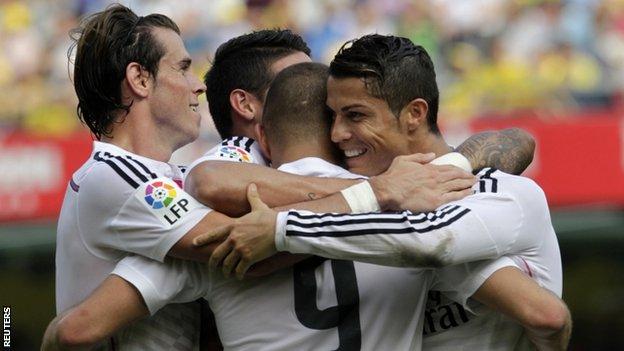 After an early onslaught from the hosts, Modric put the European champions ahead with a low shot from outside the area.

And Ronaldo scored his 10th league goal of the season when he tucked in Karim Benzema's cut-back.

It was Real's third league win in a row after losing two of their first three.

Modric's goal was his seventh for Real Madrid, all of which have come from outside the penalty area, while Ronaldo now has 13 in all competitions this season.

Villarreal had threatened to go in front as Ikechukwu Uche's low effort was well saved by Iker Casillas, before Argentine youngster Luciano Vietto sliced wide when well-positioned inside the box.

But they paid for their profligacy soon after the half-hour mark as midfielder Modric converted from 20 yards.

The visitors doubled their advantage when James Rodriguez picked out the run of Benzema and the Frenchman checked back before teeing up Ronaldo to slot home.

Casillas was required to make a fine double save to deny Manu Trigueros and Vietto, with Uche flagged offside after blasting the rebound over the bar.

Villarreal continued to press forward after the restart, with Mario Gaspar and Gabriel going close, but they ran out of steam in the last half hour as Real saw out the win.

Real's focus will now turn to their Champions League group game against Ludogorets Razgrad in Bulgaria on Wednesday.