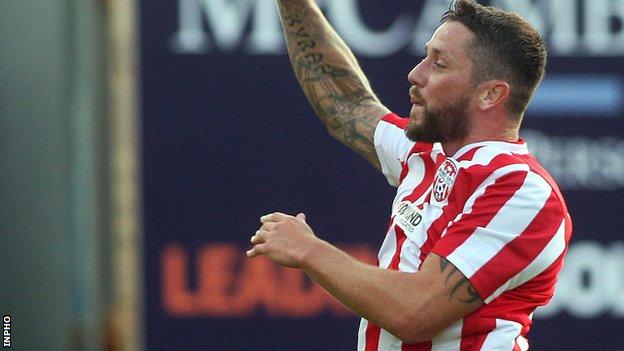 Derry City have been drawn away to Shamrock Rovers in the FAI Cup semi-finals, with St Patrick's Athletic hosting Finn Harps in the other tie.

Both matches will be played on Sunday 5 October, with Derry's match kicking off at 15:55 BST.

The Candystripes progressed to the last four of the competition by thumping Drogheda United 5-0 in their quarter-final replay at the Brandywell.

The initial game between the sides ended in a 2-2 draw.

Rory Patterson grabbed a hat-trick in the replay, with Patrick McEleney and Michael Duffy also on target.

Shamrock Rovers currently lie fourth in the Premier Division, with Derry in sixth, so those positions, allied with home advantage should make Rovers slight favourites.

St Pat's are third in the league standings and will be fancied to overcome their First Division opponents in that semi-final, which has a 13:45 BST kick-off time.