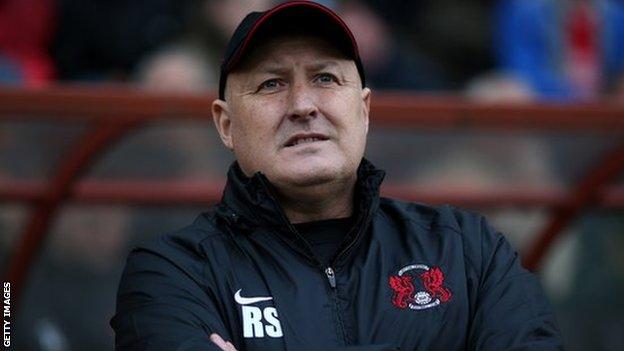 The 53-year-old has finally been appointed Bluebirds manager after leaving League One side Leyton Orient.

But who is Russell Slade? Here BBC Wales Sport has the lowdown on the new Cardiff City manager.

Wokingham-born but brought up in Nottingham, Slade is a former physical education teacher who played for Notts County reserves before a coaching career at the club which saw him progressing from assistant youth coach to assistant manager and briefly manager.

His spell in charge of County during the 1994-95 season followed the dismissal of Mick Walker and he stayed on as assistant manager when former Everton boss Howard Kendall was appointed in January 1995.

Slade was given the honour of leading out the County side, including Welsh defender Andy Legg, at Wembley for the 1995 Anglo-Italian Cup final which they won by beating Ascoli 2-1.

After managerial spells with non-league sides Armitage and Leicester United, Slade took caretaker charge of Sheffield United on two separate occasions before he was appointed Scarborough manager in 2001.

He guided the then Conference side to the FA Cup fourth round during the 2003-04 season, narrowly beaten 1-0 by Chelsea.

Grimsby Town appointed Slade manager in the summer of 2004, and during his time at the club the Mariners reached the League Two play-off final in 2006 only to lose 1-0 to Cheltenham Town at the Millennium Stadium.

After two years at Grimsby, Slade joined Yeovil Town but suffered more play-off heartache, losing in the League One final to Blackpool in 2007, although he was named League One manager of the year.

He departed Huish Park in February 2009 and became Brighton manager, saving the club from relegation from League One, although he was dismissed in November 2009 after only eight months in charge.

Slade was appointed Leyton Orient manager in April 2010 and in the final six matches of the League One season guided the club to safety. He was named League One manager of the year at the end of the 2013-14 season in which they lost on penalties to Rotherham United in the play-off final.