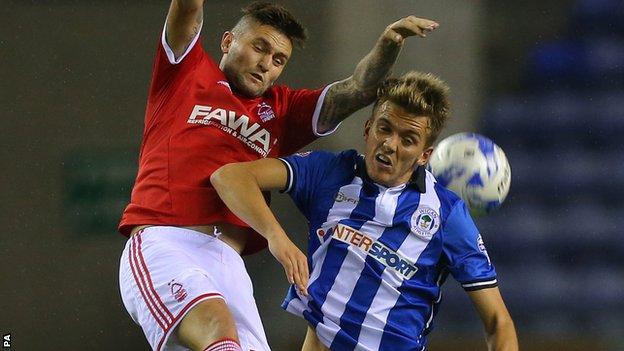 Nottingham Forest missed the chance to go top of the Championship table after being held at Wigan Athletic.

Wigan carved out the best chances before the break, Emmerson Boyce heading wide from six-yards and James McClean firing narrowly over.

But Stuart Pearce's side went close through Henri Lansbury and Michail Antonio, who missed from close range.

Forest have now been held to goalless draws in their last three league games and would have gone top with a win.

Instead, Stuart Pearce's side remain second, but moved level on points with leaders Norwich after the Canaries were beaten 1-0 at home by Charlton.

While Lansbury and Antonio were guilty of spurning good chances, eight-goal top scorer Britt Assombalonga was kept quiet as Pearce's men have now failed to score a league goal since they put five past Fulham on 17 September.

With the game heading towards a goalless conclusion, both sides pushed forward trying to claim a winner.

And Lansbury's late effort from long range hit the side netting.

Wigan have only picked up two points from their five league matches in September and drop to 20th, four points above the relegation places.

"The chairman Dave Whelan came into the dressing room before the game and gave me and the players reassurances, he was very positive.

"And the supporters were brilliant. They saw a team fighting, winning more balls, driving on, being more positive.

"We are prepared to go in a higher tempo and that then is the result - you get the crowd behind you. That is what we needed and I say 'thank you very much' for that."

"Away from home a clean sheet and a point is a fair reward.

"It was a very close game and on reflection a point was about right. We had a couple of chances in the last 10, 15 minutes and we could have nicked it.

"Overall I thought it was a fair reflection for a point apiece."