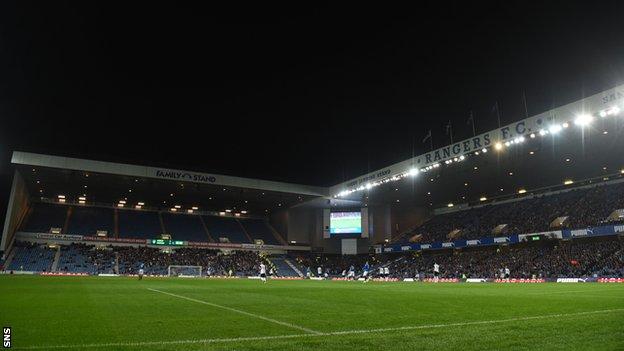 Rangers have announced the 12 members of a new fans' board they hope will usher in a "more structured dialogue" with the football club.

After receiving applications, an independent nominations committee had formed a shortlist of 38 candidates.

Club members then voted on who they wanted to "represent their interests and engage with key club staff".

The club's present hierarchy has been criticised by some sections of the support in recent months over its handling of Rangers' finances.

Rangers chief executive Graham Wallace said: "Supporters have a vital role to play in helping Rangers achieve success on and off the pitch and the introduction of the Official Fans Board will provide the platform for more structured dialogue as well as providing the club with a better understanding of the issues and concerns of the fan-base."

Each member of the club's first-ever fans' board will represent different sections of the Scottish Championship club's support.

The 12 members will elect a chairman, vice-chairman and secretary at the board's first meeting and thereafter meet at least four times each season.

Rangers added: "The Official Fans Board has been created to benefit all Rangers supporters and will provide a platform for fans to communicate directly with key club staff in a structured manner.

"It will also give the club greater insight into the topics and issues that most affect and concern the wider Rangers fan-base and allow supporters to better understand the club's decision-making process on key issues."

"Supporters have the chance to play a crucial role in helping the club achieve success on and off the pitch and the creation of this democratically-elected Official Fans Board is an important step in the club's Ready to Listen fan engagement strategy."