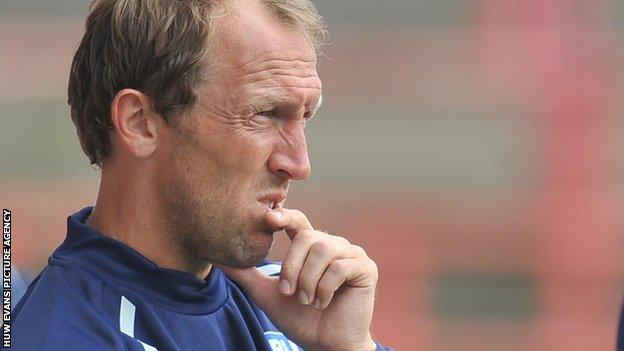 The 38-year-old Yorkshireman, who left Wrexham in February, has been without a club since finishing last season as number two to interim manager Mike Jackson at Shrewsbury.

Morrell succeeds Dale Belford, who parted company with the Lambs by mutual consent on 15 September.

They are just a point clear of the bottom three after only one win in 10 matches this season.

After being presented to supporters and players at The Lamb on Tuesday evening, Morrell's immediate task is to close the nine-point gap that has already opened up between Tamworth and the play-off places.

His first game in charge will be Saturday's FA Cup second qualifying round home tie against Rushall Olympic.

After starting his career with Nuneaton Borough, Morrell played for Newcastle Blue Star before joining Wrexham in 1998.

After returning to the Midlands with Coventry City, he also played for Blackpool and Bury, going past 100 career league goals before rejoining Wrexham in 2010.

He took over as player-manager in 2011 following Dean Saunders' departure, and led the Welsh club to the Conference Premier play-offs in two successive seasons running.

After losing in the semi-finals to Luton Town. they then beat Kidderminster Harriers to reach the final the following year, but lost to Welsh rivals Newport County, just a month after winning the FA Trophy Final at Wembley on penalties against Grimsby Town.