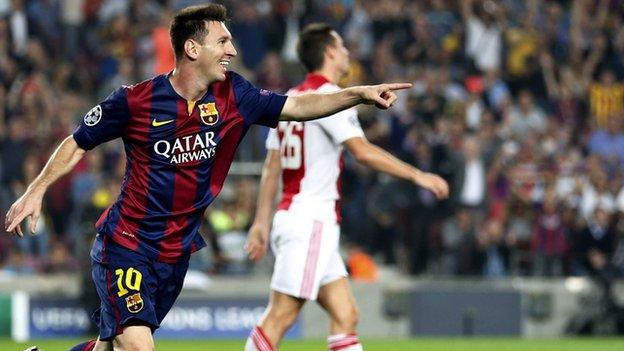 In-form Neymar scored his seventh goal in his last five Barca appearances to put the Spanish leaders ahead, before Lionel Messi converted Andres Iniesta's accurate pass to double the tally.

With this weekend's trip to the Bernabeu in mind, Luis Enrique withdrew Neymar, Messi and Andres Iniesta in the second half as Barca began to relax.

That allowed Ajax to nick a late consolation through teenage forward Anwar El Ghazi, before Barca's own young substitute Sandro Ramirez, who replaced Neymar, killed off any hope of a dramatic Dutch comeback.

Messi's strike put him within two of Spanish striker Raul, who is the Champions League's all-time leading scorer with 71 goals.

But the Argentina captain missed several other chances to move even closer to the Real Madrid legend as Barcelona dominated a poor Ajax side.

The Dutch champions offered little threat against the Catalans who are top of the Spanish league after eight matches under new boss Enrique.

Messi and Neymar posed danger throughout as Ajax, who had taken two points from their opening two Group F matches, were pinned back in their own half.

It was an unhappy return for Ajax coach Frank de Boer, who played alongside Enrique at the Nou Camp between 1999 and 2003.

His side are now four points adrift of second-placed Barcelona, who bounced back from their 3-2 defeat at Paris St-Germain.

The French champions lead the group at the halfway stage after netting a late 1-0 win at Cypriot side Apoel Nicosia.