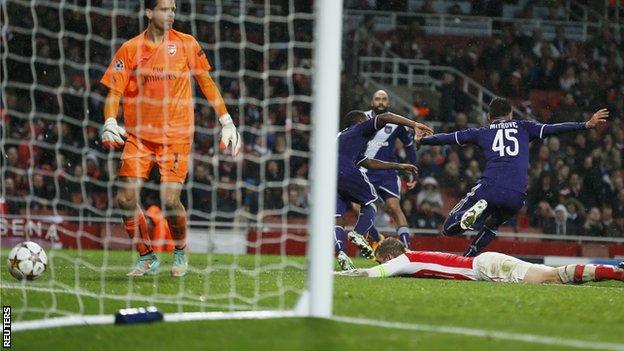 Arsenal moved to the brink of the Champions League's last 16 despite blowing a 3-0 lead against Anderlecht.

Mikel Arteta's penalty put the Gunners ahead after Danny Welbeck was fouled by Chancel Mbemba.

Alexis Sanchez doubled the lead with a stunning 20-yard volley before Alex Oxlade-Chamberlain added the third.

Anthony Vanden Borre reduced the deficit from close range before scoring a penalty, with Aleksandar Mitrovic equalising in the last minute.

Arsenal were set to book their place in the knockout stages when substitute Mitrovic headed Andy Najar's 90th-minute cross past Wojciech Szczesny from close range.

The Londoners still need one point from their two remaining games - at home to Borussia Dortmund on 26 November and at Galatasaray on 9 December - to advance.

But with Dortmund five points clear, their hopes of finishing top of the group and heading into next month's draw as one of the seeded teams are fading.

Though Vanden Borre was clearly offside when he scored his first goal, there can be no excuses for the lapses of concentration that allowed the Belgian champions to take a point.

Indeed there was no evidence of the drama to come at a rain-lashed Emirates when two goals in the space of four first-half minutes put the Gunners in control.

Chile international Sanchez had already been denied by a post when Mbemba felled Welbeck to gift Arteta his first goal in the competition, the Spaniard coolly chipping his 25th-minute spot-kick down the middle.

It was 2-0 four minutes later, the tireless Sanchez finding the net with a sublime low 20-yard volley after his free-kick cannoned off the visitors' wall.

Anderlecht battled throughout but they looked beaten when Oxlade-Chamberlain put Wenger's side 3-0 ahead by drilling home after a powerful 58th-minute run.

Vanden Borre was at least a yard offside when he began Anderlecht's amazing fightback from close range in the 61st minute.

Nacho Monreal's clumsy foul on Mitrovic then allowed Vanden Borre to make it 3-2 from the penalty spot.

And, just as Arsenal appeared to have weathered Anderlecht's late flurry, the dangerous Mitrovic headed home to the delight of the 3,000 travelling fans.

"Maybe Arsenal thought that they were superior at 3-0 and they could have fun with the public.

"But I'm very very proud of my team and they showed their character and their quality. They did fantastic."

Check out the best of Tuesday's Champions League photos in our gallery on theBBC Sport Facebook page.