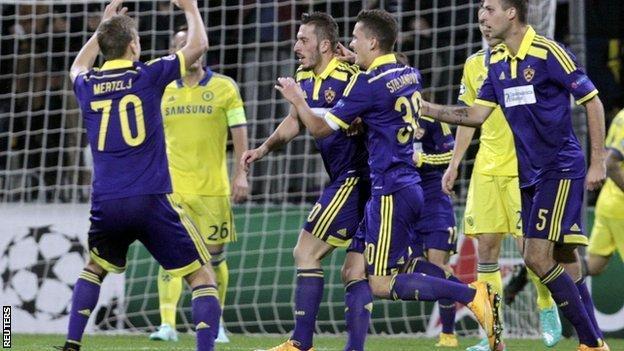 Eden Hazard missed a late penalty as Group G leaders Chelsea were held to a draw by unfancied Maribor in the Champions League.

But the Blues equalised when Nemanja Matic poked in John Terry's header at the far post.

Hazard was fouled by Mitja Viler to win a penalty, but the Belgian's weak effort was saved by Jasmin Handanovic.

Hazard's rare miss - he has scored 27 out of 30 penalties in his career - summed up a frustrating evening for the Blues, who had been denied an earlier spot-kick for what appeared a foul on Oscar and had a Diego Costa goal wrongly disallowed for offside.

Both had been brought on at half-time as manager Jose Mourinho tried to inject some energy into an under-par display.

The result, combined with Sporting Lisbon's 4-2 victory over Schalke, leaves Chelsea three points clear of the Germans and needing to win one of their remaining two games to guarantee their passage to the knock-out phase.

The Blues also equalled a club record by extending their unbeaten start to the season to 16 matches.

Mourinho, whose side face Liverpool at Anfield in the Premier League on Saturday, made four changes to the team that beat QPR 2-1 on Saturday.

Centre-back Kurt Zouma, brought in for Gary Cahill, should have opened the scoring inside 10 minutes but he headed Cesc Fabregas's dinked cross wide of the near post.

Maribor served early notice of their threat on the break when Tavares weaved through three Chelsea defenders and bore down on Petr Cech, only to over-hit his attempted pass to strike partner Luka Zahovic.

Chelsea responded strongly, as Andre Schurrle fired a shot narrowly wide before Hazard's fierce drive was pushed aside by Handanovic.

Despite Mourinho's tactical re-jig, Chelsea fell behind within five minutes of the restart. Zouma's headed clearance landed at the feet of Ibraimi, whose sumptuous curling shot found the top corner of Cech's goal.

After Costa blazed high and wide, Chelsea were given a huge let-off at the other end when Zahovic side-footed over the bar from three yards after a perfect cross from left-back Viler.

With 20 minutes remaining, the visitors were denied a penalty when Oscar appeared to be tripped by his fellow Brazilian Arghus.

Chelsea's sense of grievance was short-lived. From a Fabregas corner, Terry's downward header presented Matic with the simplest of tap-ins to equalise.

As the Blues pushed hard for a winner, Handanovic made superb saves to deny Hazard and Costa, who then had a goal ruled out for offside.

But Maribor stayed in the game and almost snatched it when Tavares slashed Jean-Philippe Mendy's square pass wide of goal.

In the 85th minute, the outstanding Hazard was tripped by Viler in the box, but Handanovic dived to his left to keep it out and secure a famous point.