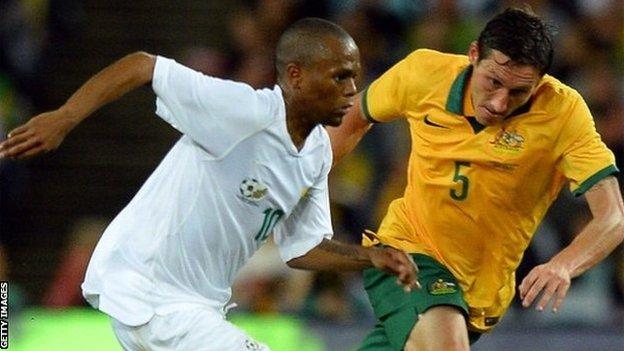 Although Serero is the only South African currently playing European Champions League football, he has been in and out of the national squad.

Another recalled midfielder is the 32-year-old Reneilwe Letsholonyane, who was described by former South Africa coach Gordon Igesund as being too old for international football.

The Kaizer Chiefs box-to-box workaholic has been in outstanding early season form with six goals, helping his club to 10 victories in 10 league and cup matches.

At the other end of the age spectrum, Fagrie Lakay, who is just 17 and an Under-20 international, has earned a senior call-up. The teenage midfielder plays for Santos in the National First Division.

Congo lead Group A with maximum points after a shock away win over Nigeria and a routine home victory over Sudan. South Africa have four points, Nigeria one and Sudan none.

The top two finishers are guaranteed places at the 2015 finals in Morocco while the best of the seven third-place teams after the final qualifiers in mid-November also qualify.