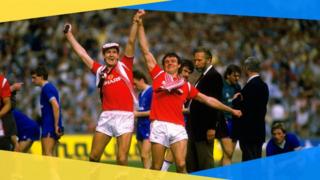 But perhaps his most famous moment came in the 1985 FA Cup final against Everton. The Merseysiders were heavily backed to defend the trophy they had lifted 12 months earlier after a campaign that had brought them the league and the European Cup Winners' Cup.

Their odds shortened still further when United defender Kevin Moran upended Peter Reid in the 78th minute to become the first player to be sent off in an FA Cup final.

But with the game in extra time, Whiteside dribbled in off the right flank before performing a step-over and curling a perfect arcing shot round defender Pat van den Hauwe, past Neville Southall and into the far corner for the only goal of the game.

The goal remained the highlight of Whiteside's career. He was dogged by injuries and, after a move to Everton in 1989, retired at 26 because a persistent knee problem.