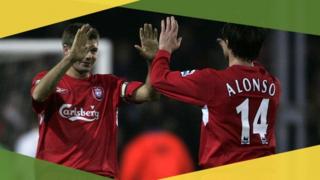 Xabi Alonso had already lobbed Luton goalkeeper Marlon Beresford from 40 yards to pull Liverpool level at 3-3 against Luton in a classic third-round tie in 2006, but the Spanish midfielder saved his best for last.

In the final minute, with his side now 4-3 down, Beresford came up for a corner in search of a dramatic equaliser.

When the set-piece was cleared to Alonso, the Spaniard ignored captain Steven Gerrard's loud pleas for a pass and instead drove the ball 70 yards into the unguarded net.

The goal won Liverpool fan Adrian Hayward £25,000 after he bet £200 on Alonso scoring from inside his own half at some point in the 2005-06 season on the basis of a dream he had.

Alonso announced he would retire from football at the end of the 2016-17 season.