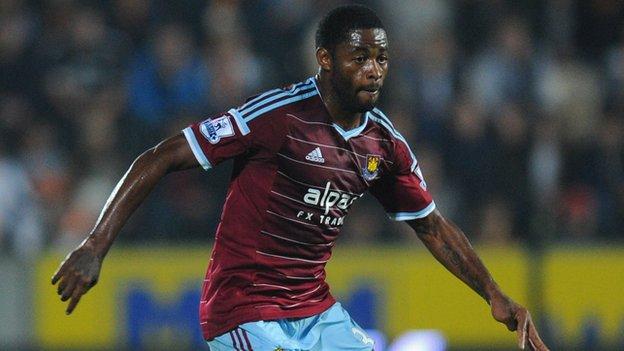 There is no place in the latest Cameroon squad for West Ham's Alex Song, despite the fact he has completed a three-match ban.

The Indomitable Lions are set to play Sierra Leone on 10 and 15 October in Group D of 2015 Africa Cup of Nations qualifiers.

Song was given the suspension after being sent off during Cameroon's second match at the World Cup.

He was dismissed for elbowing Croatia's Mario Mandzukic in the 4-0 loss.

The 28-year-old missed the final Group A match in Brazil, a 4-1 loss to the hosts, and then Cameroon's opening two Nations Cup qualifiers.

Following the World Cup, he joined English Premier League side West Ham on a season-long loan from Spanish giants Barcelona.

There is a recall for the Lyon defender Henri Bedimo, who missed the qualifying wins against DR Congo and Ivory Coast through injury.

Cameroon are set to host both qualifiers against Sierra Leone in Yaounde as the Leone Stars are unable to play at home due to the ongoing outbreak of the deadly Ebola virus in the country.

The Indomitable Lions are top of Group D after the first two matches with the top two sides in each group guaranteed to qualify for January's finals in Morocco.