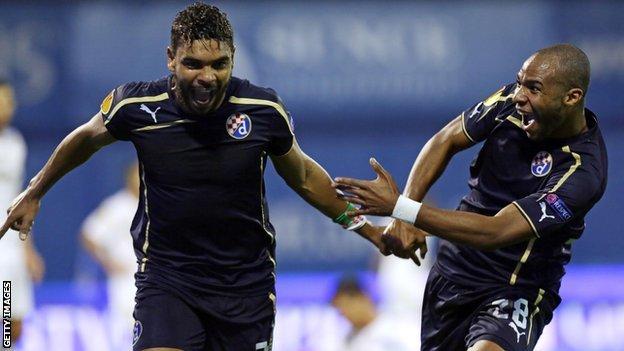 On Thursday, Ronny Deila's Celtic can draw a line under the mixed bag that was September.

Perhaps the "peak" of last month was the Europa League Group D point brought back from Austria after an admirable 2-2 draw with Salzburg.

Now, to build on that, in their own back yard.

This time, it's the Croatian champions, Dinamo Zagreb, who'll provide stern opposition. The last time they visited Glasgow, in 1998, a certain Mr Mark Viduka featured for the away side - ahead of his subsequent transfer and successful spell at Celtic.

Thursday's tie could be the night for a striker already at the Scottish champions to begin to shine - Stefan Scepovic.

It won't win them any Europa League points, but in terms of Twitter followers, Celtic lead Dinamo Zagreb by 235,000 to 8,000.

Since his £2.3m move just before the summer transfer deadline, the 24-year-old, who scored 23 goals last season while at Sporting Gijon, has failed to register in five matches for Celtic.

But he's from Serbia, so scoring against a Croatian team might prove motivation enough to get him off the mark. He really needs to, given that Celtic's other new forward, John Guidetti, is not eligible for the Europa League.

In the meantime, here are five things you might want to know about Dinamo Zagreb.

I wonder what Celtic would give to have a striker who had already hit 11 goals so far this season?

Well, Dinamo Zagreb have two players who fall into that category.

Algeria international El Arabi Hilal Soudani has netted 11 times in 15 appearances for the Croatians this season, including a hat-trick in their 5-1 Group D thrashing of Astra.

The 26-year-old, who wears shirt number two, also has an impressive record for his country, whom he represented at the 2014 World Cup in Brazil. Soudani, who is often used out wide as well as through the middle, has scored 12 in 26 for Algeria.

Duje Cop is the other Dinamo player who reached the 11-goal mark before September was out.

With only one cap, the 24-year-old Croatian is not so experienced on the international front but burst onto the scoring charts this season with a hat-trick for Dinamo in his second appearance.

Scottish football commentators will be grateful they never had to cross the bridge of pronouncing Ognjen Vukojevic on a regular basis.

It could've been oh so different had a 2008 transfer of the 55-time capped Croatia internationalist materialised when Gordon Strachan was manager of the Hoops.

At the time, Vukojevic's agent included Celtic when he commented: "There are some big, big clubs interested."

Alas, Parkhead never became the destination for the now-30-year-old, who moved that summer instead to Dynamo Kiev.

The midfielder, who has scored four times for Croatia, spent five productive seasons in Ukraine but has since been loaned back to Dinamo Zagreb for the rest of the 2014-15 campaign.

The hierarchy at Dinamo Zagreb is a bit of a family affair, with manager Zoran Mamic being the younger brother of chairman Zdravko Mamic.

But the older sibling seems to have made a good choice.

In the 47 games that Zoran Mamic has been boss, he has won 27 of them. The 43-year-old took over in October 2013 and led Dinamo to their ninth consecutive league title to get his reign off to a promising start.

And that encouraging beginning has yet to properly dip. Mamic has not lost a match since 6 August and the current Croatian league leaders have gone 11 games unbeaten since.

Mamic is also claim to be a Dinamo man, both starting and finishing his playing career at the 'modri' (blues), making more than 150 appearances in the process.

A defensive midfielder by trade, he picked up six caps along the way and was an unused squad member at the 1998 World Cup in France, where Croatia finished third.

While Celtic looked to Manchester City for a season-long loan acquisition in the shape of Swede John Guidetti, Dinamo Zagreb rang up Manchester United for help.

So the Old Trafford side let them borrow Chile international Angelo Henriquez for the season - a striker who has not made a senior appearance for the Red Devils since joining them two years ago.

And it's not the first time the 20-year-old has gone elsewhere for regular action.

A spell at Wigan in 2013 was largely unproductive, but his subsequent stint in Spain with Zaragoza had more to write home about - six goals in 25 appearances.

It looks like Henriquez might finally be on an upward trajectory, having netted three goals in four outings so far in Croatia.

Furthermore, with two goals in three run-outs for Chile, the man from Santiago must have something.

And the man once booked three times in a match...

Celtic will hope Josip Simunic's luck is finally out.

The Croatia international, capped 105 times, certainly used up his fair share of it at the 2006 World Cup in Germany.

English referee Graham Poll booked the defender, who is now Dinamo Zagreb's captain, three times before showing a red card during a 2-2 draw against Australia.

Following that error, Poll was not kept on for further matches in the tournament, while Fifa president Sepp Blatter indicated Australia could have demanded a replay had they lost and been knocked out.