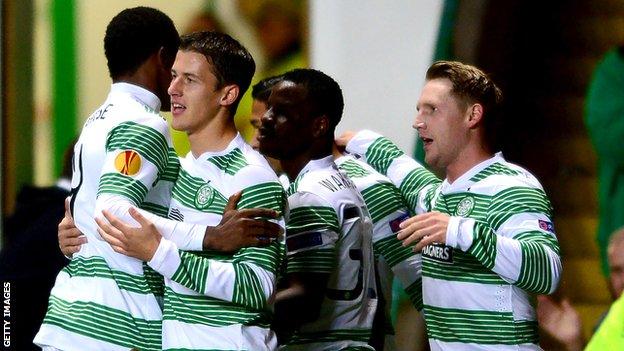 Celtic had moved in front with the game's first chance - Kris Commons rounding off a slick move with a clinical, angled finish on six minutes.

And that early goal secured a valuable win to leave Celtic well placed on four points after two games.

With a double-header against Romanians FC Astra, who prop up Group D after two defeats, to follow, Ronny Deila's side can be satisfied with their campaign so far, though defensive frailties persist.

The clean sheet may belie that, but Gordon - just as he was in the opening draw away to Salzburg - was sensational, saving brilliantly from Wilson Eduardo on two occasions and once from Marcelo Brozovic.

And when he was beaten - by Wilson Eduardo - the crossbar came to his rescue.

As is so often the case at the other end for Celtic, Commons was pivotal to the creation and execution of the decisive goal.

His cute step-over dummy allowed the ball to find its way to Anthony Stokes and the pair's inherent understanding came to the fore as the striker played a first-time pass back to Commons, who rifled a shot low past Eduardo.

That set the tone for a pulsating first-half, which at times raged from end-to-end, with the only surprise that no further goals ensued.

It took Dinamo a good 20 minutes to contribute to that, but when they did Wilson Eduardo was central to their best play.

Having sent a free header over the top, he then thudded a marvellous 25-yard strike against the frame of the goal and Gordon reacted smartly to push away the Portuguese striker's fizzing volley.

In between those efforts, Celtic passed up a glorious opportunity to double their lead - Commons' poise on this occasion deserting him as he failed to find Stokes after a panicked touch from the goalkeeper gifted them possession in front of the otherwise unguarded net.

Aleksandar Tonev and Virgil van Dijk required Eduardo to do rather better with shots from distance but after the break the visiting keeper was virtually untroubled.

Nonetheless, his team-mates could not find a way past his opposite number, ensuring the Croatians left empty-handed and Celtic moved alongside Red Bull Salzburg at the top of the group.

The pick of Gordon's stops was again from Wilson Eduardo when the Scotland international threw up an arm to save from a one-on-one situation and the 31-year-old was soon diving at full-stretch to divert a powerful Brozovic strike.