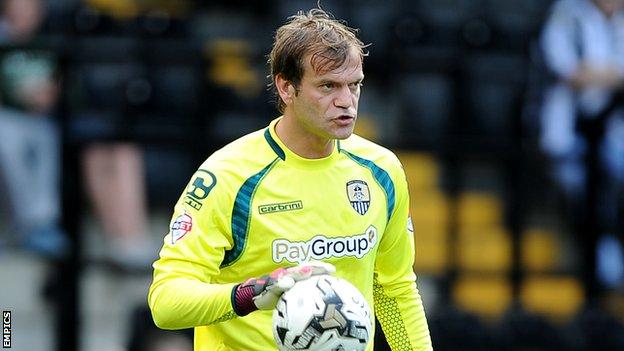 Notts County extended their unbeaten run to seven games in all competitions with a home win against Gillingham.

Shaun Harrad gave the Magpies the lead, latching on to Jake Cassidy's flick-on to head past Stephen Bywater.

Doug Loft almost pulled one back for the Gills before half-time but his 25-yard strike cannoned off the crossbar.

The Gills were denied an equaliser 10 minutes from time as Roy Carroll saved Luke Norris' penalty after Bradley Dack had been fouled by Louis Laing.

"What a week. Back-to-back wins don't come easily in this division, There are a lot of good teams, so I was pleased on Tuesday night - and today we got the win that I thought we deserved.

"The penalty save was fantastic, Roy has done his job. He's the best goalie in League One.

"We all knew that any team managed by Peter Taylor are going to make it difficult for you, and it was today, but we came through it well."

"I was pleased with the way we played for 90 minutes, but again disappointed in the goal we conceded, because their man got his head to it better than ours and I think we've got to learn from that.

"We've got to believe that if we keep doing what we're doing the results will change.

"It was a penalty miss, that's all it is. It's not the end of the world. A very experienced goalkeeper guessed right."