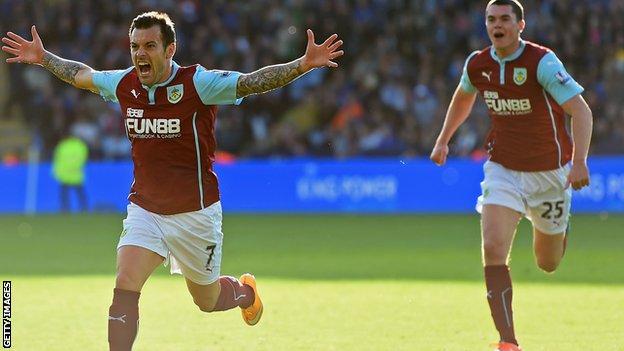 Substitute Ross Wallace scored a stoppage-time equaliser at Leicester to lift Burnley off the bottom of the Premier League.

Ghana international Jeffrey Schlupp put the Foxes ahead with a right-foot finish after Riyad Mahrez's cross.

Burnley, who started the day at the foot of the table, leapfrog QPR, who travel to West Ham on Sunday.

The Clarets head into the international break without a top-flight win in seven attempts and lost defender Kieran Trippier to a serious ankle injury.

However, this was one of their most satisfying days since returning to the top flight as a spirited performance saw them twice come from behind to earn a point.

Leicester remain unbeaten at the King Power Stadium this season, but that will be of little consolation for Foxes boss Nigel Pearson.

His side were moments away from shooting up seven places to fifth spot when Scott Arfield was fouled just outside the Leicester area by Matthew James.

Wallace, who had replaced Kightly, bent the ball over the wall and into the far corner of the net to spark joyous scenes among Burnley's travelling support.

The visitors will argue that Leicester should have finished with 10 men after the crunching challenge that ended Trippier's day by Schlupp, who had already been booked.

Algeria international Mahrez impressed for the hosts and forced visiting keeper Tom Heaton into his first serious save in the 20th minute after letting fly from long range before three goals in the space of seven first-half minutes brought the game to life.

Robbie SavageBBC Match of the Day

"With Ross Wallace's free-kick, I think Kasper Schmeichel gives him too much to aim for. I do think he's a good keeper but Schmeichel has to do better there.

"Burnley desperately need a win but this was a good point away from home."

Leicester went ahead when Schlupp connected with Mahrez's low cross to steer the ball beyond Heaton for his first Premier League goal.

Burnley had gone over nine hours without a league goal when Kightly bundled the ball over the line from close range six minutes later after Lukas Jutkiewicz headed on Arfield's cross.

But the Clarets were on level terms for only 94 seconds, the unmarked Mahrez nodding home Jamie Vardy's cross five minute before half-time.

The visitors were the better side after the interval, Jutkiewicz twice going close, while Trippier received lengthy treatment before being carried off to prompt seven minutes of stoppage time.

"I'm annoyed, we should win the game. We're better than we were last season and I don't think Burnley are as good as they were on today's performance.

"But what they do have is spirit.

"It felt like a Championship game, there was not a great deal of fluidity to it.

"Burnley didn't come here to play any fluid football, they came to be difficult to beat. We didn't do enough with the ball but we still looked comfortable."

"I was really pleased with the performance and the point adds a bit of gloss to it.

"It's been coming and it was a moment of real talent from Ross (Wallace).

"The first goal was a fantastic little clip from Scott Arfield to Lukas (Jutkiewicz) and Kites is on the spot.

"It was a really good move and it's important we find that within our play."