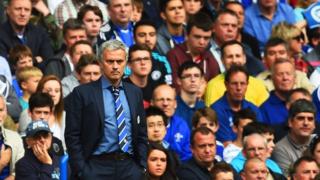 Chelsea manager Jose Mourinho praises Diego Costa after the striker scored one goal and helped create another in Chelsea's 3-0 win over Aston Villa.

Oscar was first on the scoresheet and Costa added Chelsea's second with a header before a jinking run and shot led to a third goal for Willian from close range.

Chelsea are now the Premier League's leading scorers with 19 goals from six matches.