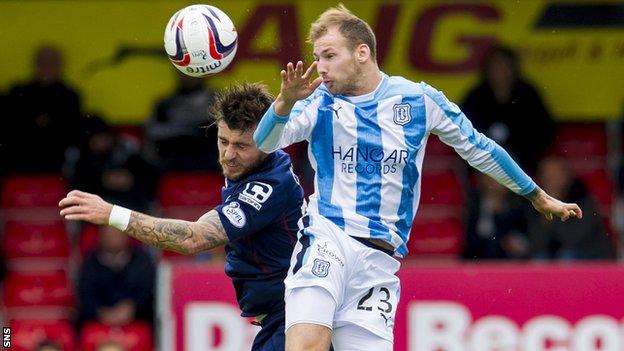 Dundee manager Paul Hartley felt a stoppage-time defeat by Ross County was "cruel", but accepted his team had been second best.

Darren Maatsen's goal gave County a 2-1 league win - their first of the season - after David Clarkson had cancelled out Michael Gardyne's opener.

Though buoyed by Clarkson's first goal for Dundee, Hartley conceded his team has much to improve on.

"Overall, we were poor, it wasn't our best performance," he said,

"We didn't play as well as we can play. We made too many mistakes, too many players had an off day.

"We warned the players before the game [that County were chasing their first Scottish Premiership victory]. Credit to County, they deserved that.

"We scored a good goal with Clarkson so it was pleasing for him but overall we must do better."

The Dens Park side sit seventh in the table with 10 points after eight matches.

"We're satisfied but we know we need to get better," added Hartley.