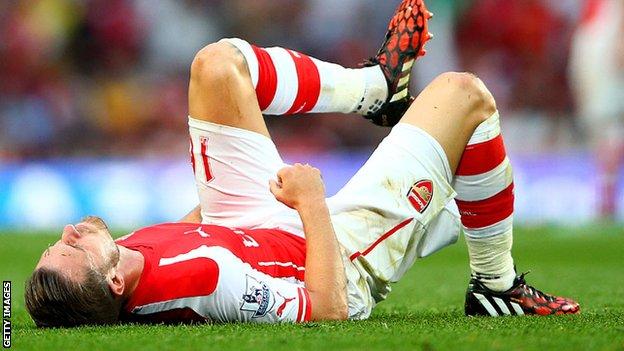 Aaron Ramsey is an injury worry for Wales manager Chris Coleman less than two weeks before their Euro 2016 qualifier against Bosnia-Hercogovina.

The Arsenal midfielder was substituted during the first half of the north London derby which ended in a 1-1 draw.

Gunners boss Arsene Wenger says the hamstring injury will rule Ramsey out of games with Galatasaray on Wednesday and Chelsea on 5 October.

Wenger's reaction to questions about whether Ramsey and Mikel Arteta - also injured against Tottenham - would play in the Champions League match against Galatasaray and the following Premier League game with Chelsea will be a worry for Wales fans.

"No chance. If it is a muscular problem I don't see how they can be fit in five or six days time," he said.

The fitness of Ramsey and Real Madrid forward Gareth Bale is seen as key to Wales' hopes of qualifying for the finals of a major tournament for the first time since the 1958 World Cup.

Bale scored twice in their opening 2-1 win over Andorra in Group B.

"You've just got to keep your fingers crossed that it's not as bad as first thought and maybe he can recover in a week to 10 days," added Blake.