MOTD2 pundit Kevin Kilbane expands on his TV analysis of how Burnley's lack of a goal threat means their approach of attempting to contain teams is seriously flawed.

It is now 526 minutes since Burnley scored their first and last Premier League goal of the season and Sunday's 4-0 defeat by West Bromwich Albion showed that determined defending only gets you so far when you do not have anything to offer up front.

The dilemma for Clarets boss Sean Dyche is that if he tries to do anything but contain the opposition then it will leave his side more exposed at the back. 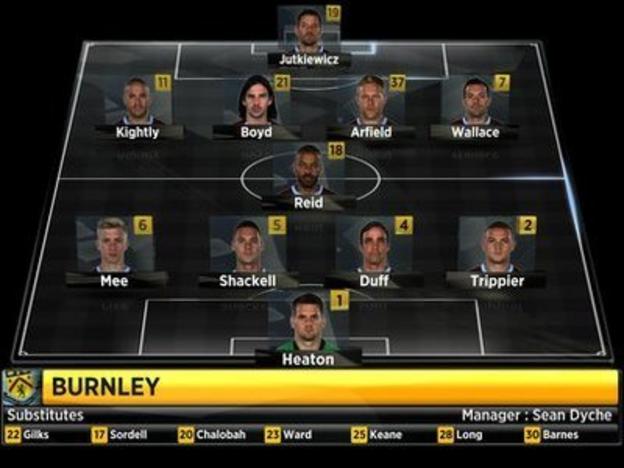 So their midfield is focused on protecting their defenders rather than trying to support their lone striker up front.

The aim of their defensive approach is to keep them in matches for longer but, as we saw against the Baggies, when they go a goal down then they do not have a plan B.

Burnley's lack of ambition in attack means that their excellent work-rate is counting for nothing and, at the moment, it is hard to see where their next goal is coming from, let alone their first win.

The three 0-0 draws that Burnley had coming into the West Brom game gives you a good idea of what their approach this season has been all about.

Dyche does not want his team exposed out wide or for opponents to get behind his centre-backs, who both lack pace, so he looks to protect his defence as much as possible.

Burnley's back four drop deep and keep a very narrow shape, with Steven Reid sitting in front of Michael Duff and Jason Shackell. In fact, most of their midfield is asked to concentrate on their defensive duties. 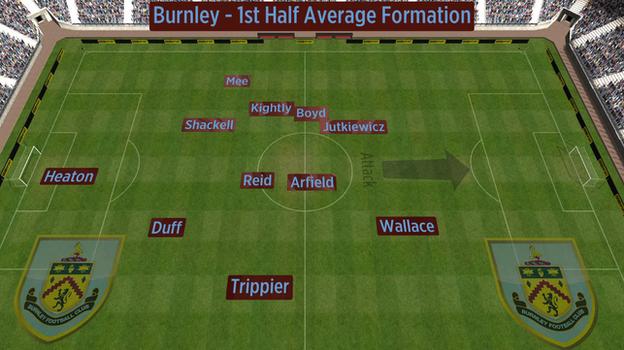 For 30 minutes at The Hawthorns, it worked. They defended well and gave very little away.

But then they had one loss of concentration at the back, when Shackell got under the ball at a corner and could not pick up his runner, Craig Dawson, who scored at the back post.

The second goal, just before the break, was again from a set-play and a very similar story. It meant that after a half where Burnley had followed their game-plan pretty well, they now had to chase the game.

That meant they had to go for it a little bit, but I don't think that really ever happened.

Dyche changed his midfield, bringing on Ashley Barnes and Nathaniel Chalobah at half-time, but although his players were briefly pressing West Brom higher up the pitch, they never really imposed themselves on the game. 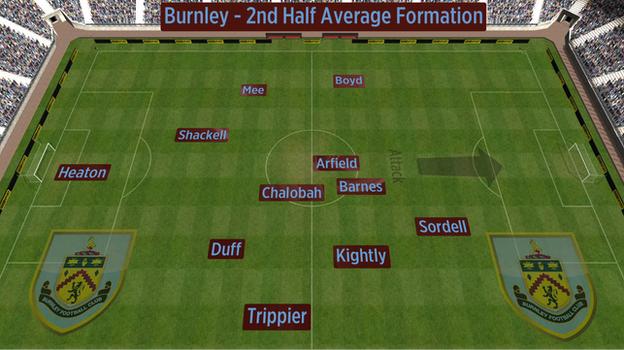 West Brom's defensive midfield duo Craig Gardner and James Morrison were never under much pressure and the Baggies defence was very rarely troubled.

It took 65 minutes for Burnley to get an effort on target, a header which was their lone striker Lukas Jutkiewicz's only attempt of the game.

Jutkiewicz is inexperienced at this level and only leading the line because of the injuries to Danny Ings and Sam Vokes, but it was not his fault he was so ineffective before being replaced by Marvin Sordell after 68 minutes. 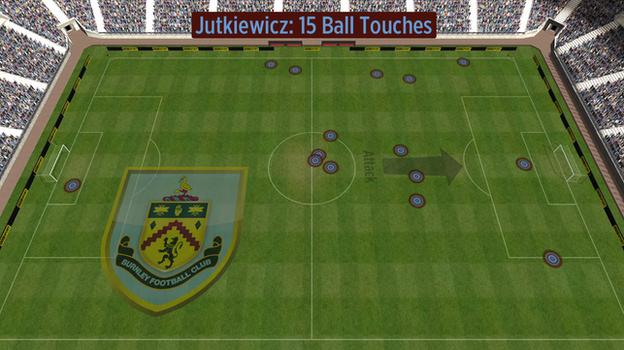 He was isolated in attack and, with the rest of the Burnley side playing so deep, invariably the only service he got was through long balls forward, which were easy for Joleon Lescott and Dawson to gobble up.

Baggies are where Burnley want to be

Sunday's game was also a good example of where West Brom are at right now, and they are probably the team that Burnley aspire to be. 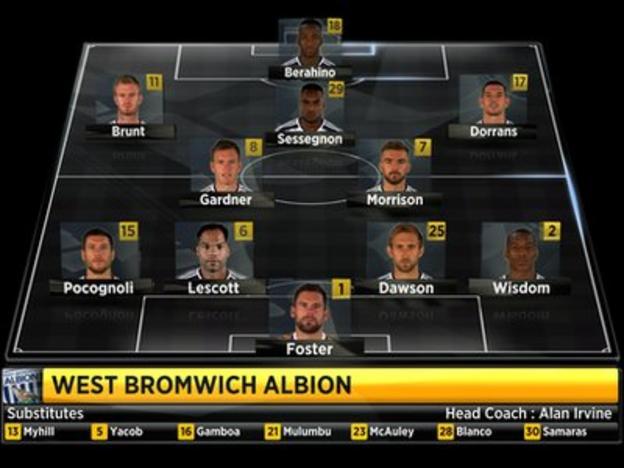 The Baggies are hard to break down and well-organised defensively, but the important thing is that they carry a threat going forward too.

Like Burnley, they only had one man up front, Saido Berahino, but unlike the Clarets they gave him plenty of support.

Stephane Sessegnon, who was operating behind him, works very hard but he is not a defensive-minded player, and he was allowed to push on beyond Berahino when he wanted to.

The Baggies were not able to create very much in the first half but, once they had opened the game up, then they enjoyed chance after chance. 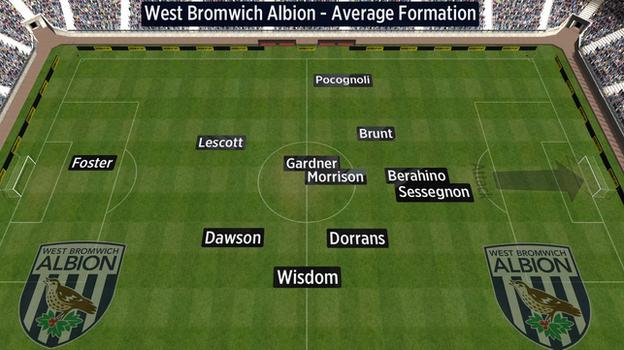 Berahino worked hard across the whole front line and also showed that he can finish. His scoring statistics are very good when he starts - with 14 goals from 22 games for his club and nine in seven for England Under-21s - but that was something he did not do a lot for West Brom towards the end of last season.

He fell out of favour under previous Baggies boss Pepe Mel but it is encouraging to see him back in the team and obviously he has got his confidence back. 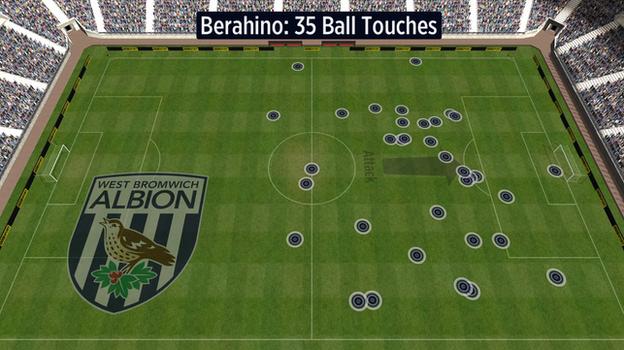 It will be the same for the rest of his team-mates. After a difficult start to the season, Alan Irvine's side can now go into a couple of difficult games against Liverpool and Manchester United on the back of three wins in the space of a week.

As well as a new manager in Irvine, there was a huge turnover of players at The Hawthorns over the summer and I think they are going to get better as the season goes on, even if there will not be many games where they find it as easy to score as they did on Sunday.

Time to let the Clarets off the leash?

While Burnley are concentrating on containing teams, their old intensity is not there and it is holding them back

Burnley's future looks a lot less bright, and it appears a long battle against relegation lies ahead of them.

They have not spent much money since winning promotion and have probably looked at what Hull did last season as a newly-promoted side for their template for staying up.

The Tigers also lacked a goalscorer in the first half of the season, until they signed Nikica Jelavic and Shane Long in the January transfer window, but the big difference between them and Burnley is the amount of quality and experience they had in their midfield and defence.

Dyche's team is largely the one that came up from the Championship last season and maybe it is time for him to go back to playing to their strengths.

Yes, he is still without the goals of Ings and Vokes while they remain injured, but the key player in their promotion was actually their right-back Kieran Trippier, who was probably the best full-back outside the Premier League.

He defended well, but he also got forward to create a huge number of their chances. So far this season, his team's tactics have not allowed him to do that.

It is the same for Scott Arfield, who linked up so well with Trippier down their flank in their promotion campaign.

I remember speaking to Dyche and him telling me that Arfield was breaking his own records every week for the amount of high-intensity running he was doing during games. There was fantastic energy right through the side.

While they are concentrating on containing teams, that intensity is not there and it is holding them back.

So maybe it is time to forget the defensive approach and let players like Arfield and Trippier off the leash - right now, I don't think Burnley have much to lose.