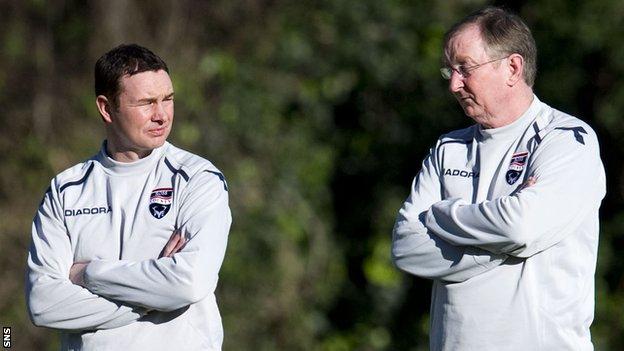 Derek Adams' father made the phone call to tell his son he was being sacked as manager of Ross County, the 39-year-old has revealed to BBC Scotland.

Director of football George Adams, 64, followed his son out of Victoria Park.

And Derek Adams suggests County showed a lack of loyalty in ending the pair's long association with the club.

"He did actually sack me," said Adams. "He phoned me to tell me I was getting the sack and I then had to phone the chairman about the situation."

County were bottom of the Scottish Premiership at the time, having lost their opening four games, but had just won their first game of the season - a League Cup tie away to League One outfit Stranraer.

Club chairman Roy MacGregor, who had initially informed Adams' father of the decision, revealed later that the Dingwall outfit wished to move in a "different direction".

Adams junior, who won two promotions and reached two Challenge Cup finals and one Scottish Cup final during two three-year spells as County boss, believes it had "nothing" to do with results on the park.

"The club wanted to go back to being a community club and that is something they had also talked to us about over many years," the former player, who had two spells with the club from 1996-98 and 2006-09, told BBC Radio Scotland's Sportsound.

They wanted to have bouncy castles outside the stadium, face painting and take that away from producing a first team

"The director of football and I were adamant that we wanted to look to the first team - to try to get the club into the Premier League and, over the last seasons, we've done that.

"I think it's the wrong direction they've taken.

"What does it mean to go back to its roots and be a community club? I am not sure what that means."

He added he had seen the warning signs when two new directors came into the club.

"They brought in a director of operations, Peter Swanson, who was Roy MacGregor's best friend, in the summer.

"We felt there could be a problem here and I think that was the first issue.

"We didn't know the appointments were coming," he added. "We had run the football club for eight or nine years. They wanted to run it in a different way.

"They wanted to have bouncy castles outside the stadium, face painting and take that away from producing a first team."

Adams nevertheless thought it was a "huge disappointment" and "huge surprise" to have lost his job, suggesting he would have expected greater loyalty considering the club had previously rejected an approach from Aberdeen for his services.

"Over the last four weeks, I haven't heard from anybody at the football club in terms of directors or chairman, so that tells its own story," added Adams, who has been succeeded by Jim McIntyre at Victoria Park.