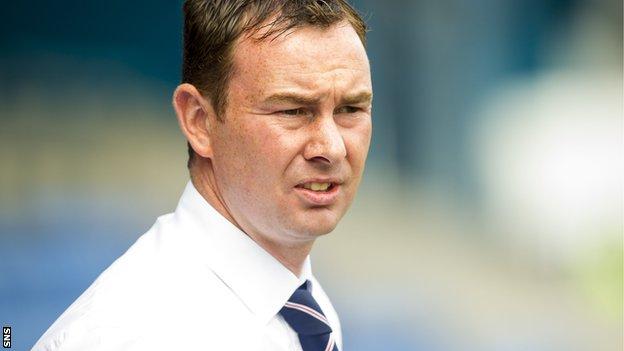 Like all footballers and managers, Derek Adams has been accused of many things - but lacking confidence is not one of them.

The 39-year-old admits that the last month since being sacked as manager of Ross County has "been very difficult".

However, he believes his reputation as a football manager remains unblemished despite the club making its decision while his rebuilt team sat bottom of the Scottish Premiership after four straight defeats.

Adams, whose association with County began as a player in 1996, was in his second three-year spell as manager at Victoria Park.

In tandem with his director of football father, George, the former Aberdeen, Burnley, Motherwell and Livingston midfielder led the unfashionable Staggies into the Scottish top flight for the first time three seasons ago.

I am in no doubt that we would have been able to finish in a very good position at the end of the season.

"If you look over the last two spells I've had there, not just the last three seasons, we've been to two Challenge Cup finals, we've won the First Division, the Second Division and we've been to a Scottish Cup final as well, all in seven years," Adams told BBC Scotland.

"We started the last season not as well and we finished seventh. We finished the season before not so well and finished fifth.

"You've got to remember we lost to Hamilton 5-1 in the second game of the First Division and then we went 40 games unbeaten.

"So, from my point of view, it was nothing to do with the football results. The club wanted to go, as they say, in a different direction."

Club chairman Roy MacGregor has stated that he wants County to regain their role as a community club - and the this week advertised for a development officer who will be tasked with increasing "participation in football across all ages and abilities".

Adams, though, believes that he and his father George, who also departed his role as County's director of football, had been able to combine the need for a strong first team with bringing young talent through the club's youth system.

Asked for his reaction to being sacked, he replied: "Huge disappointment at the way things have happened and huge surprise as well.

"Roy MacGregor said at the start of the season he felt it was the strongest squad he'd seen at the club.

"I am in no doubt that we would have been able to finish in a very good position at the end of the season.

"If you look at the kind of players we have been able to take in over the years, the way we've transformed the football club - helped by fantastic staff we've had there - I think now the soul has probably gone out of the football club.

"Two people who have been prominent in the football club for nearly 10 years have moved out and they are going to take a bit of recovering from that."

Adams was dismissed only days after County recorded their first win of the season - away to League One side Stranraer in the League Cup.

They followed that with another four defeats before Saturday's first league points were secured under new manage Jim McIntyre with a victory at home to Dundee.

"At the start of the season, we had played well against Kilmarnock, St Johnstone and Dundee United and I think, after the Stranraer game away from home, which is a difficult venue to go to, we would have been fine this season," said Adams.

The Aberdonian has had his critics, some suggesting that his occasional criticism of rival teams has not endeared himself to other managers.

Adams insists that, at times, he had to use the media to benefit a small provincial club battling against the odds.

"Did anyone talk about Alex Ferguson when he did it in 1983 with Aberdeen when he talked about the west coast bias? No," he said.

"Over that period of time, managers have been great. I speak to them all the time and we have no problems."

Adams also defended the large influx of foreign players both in the summer and the last January transfer window, during which he restructured a struggling side to avoid relegation.

He describes as "a myth" suggestions that he broke the club's budget and stressed: "Two seasons ago, we made a hefty, six-figure profit at the football club that's never been talked about.

"Nobody can be critical of what I did at Ross County Football Club. You can't be critical of two Challenge Cup finals, two championships, a Scottish Cup final and finishing fifth and seventh in the top flight.

"You can't be critical about a small club like Ross County Football Club - one of the lowest budgets in the division."

Adams had left the County hot seat first time round to become Colin Calderwood's assistant at Hibernian in November 2010, but he returned to Dingwall at the end of that season.

Two seasons ago, he was also the subject of an approach from Aberdeen that was rebuffed by County and Adams believes another offer will eventually materialise.

"I just need to see where the next opportunity will come and people will look at the record I had at Ross County and the restraints I was under," he suggested.

Adams just needs to convince another chairman to have as much faith in him as he has in himself.