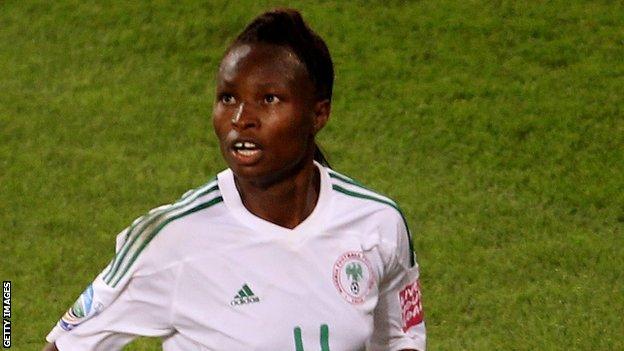 Perpetua Nkwocha, Stella Mbachu and Precious Dede have been included in the Nigeria squad for the 2014 African Women Championship (AWC) in Namibia.

The team also contains a familiar face in Asisat Oshoala, who was top scorer and Most Valuable Player at the Fifa Under-20 Women's World Cup in Canada in August.

Nigeria's Super Falcons will be seeking redemption in Windhoek after they finished fourth in the last edition, their worst finish in the history of African Women Championship.

The most successful team in the competition, with six titles, Nigeria last won the trophy in 2010, when they beat Equatorial Guinea 4-2.

The Super Falcons are expected to comfortable qualify from Group A, which includes hosts Namibia, debutants Zambia and Ivory Coast.

The championship is scheduled for 11-25 October 2014 in two stadiums in Windhoek.

It will also serve as qualification for the Fifa Women's World Cup to be held in Canada from 6 June to 5 July, 2015.