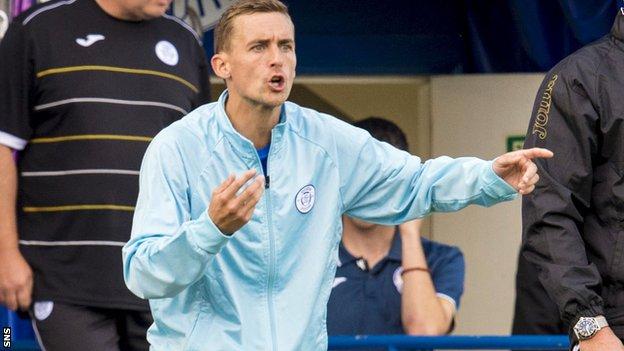 Queen of the South have appointed James Fowler as their new manager.

Fowler joined the Championship club during the summer as player-coach and has been in temporary charge since Jim McIntyre left for Ross County.

The 33-year-old spent most of his playing career at Kilmarnock, where he made more than 400 appearances.

"I've enjoyed the last few weeks being interim manager so to get the job is a great feeling," Fowler told BBC Scotland.

We're looking to get top four again, we know it's going to be difficult but that's the aim

Fowler's first match in temporary charge was a 1-1 draw with Falkirk and he guided the Dumfries outfit to a 1-0 win over Hibernian next time out.

His side were beaten 2-1 by Cowdenbeath at the weekend, though, and Fowler admitted he was relieved that the result did not cost him the chance to take over full time.

"I was a bit worried if I'm being honest. It wasn't really a Queens performance that we've seen this season but the boys reacted in the second half and we were unlucky to not at least get a draw," he added.

The new manager, who has a contract until the end of the season, revealed he is not yet ready to quit as player.

"We'll see how that develops over the coming weeks and months, and who we've got coming back from injury. It might be I take a step back then," he said.

Queens are currently fourth in the Championship table and Fowler's target for the campaign is to stay in those promotion play-off places.

"We're looking to get top four again, we know it's going to be difficult but that's the aim," he said.

"We've had a decent start to the season so hopefully that continues and we're in amongst it come the end of the season. If we could get into the Premiership it would be great for the club."