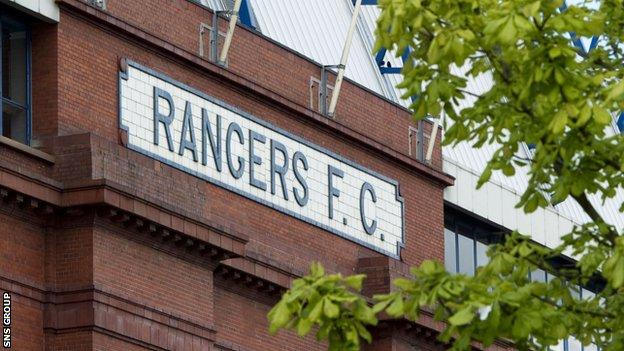 Rangers have repaid the short-term loans they took out earlier in the year from shareholder George Letham and football board chairman Sandy Easdale.

in March on terms more generous to the club than the deal it had struck with Laxey Partners.

Easdale has been repaid the he arranged with Rangers the previous month.

Club assets Edmiston House and Albion car park had been used as security.

The repayment of both loans means that the security on the properties adjacent to Ibrox Stadium has been released.

In a statement to the Stock Exchange, Rangers International Football Club report that Letham "retains the right to receive a premium" of £45,000 in cash on 23 February 2015 or, if he prefers and the company has the authority, in new ordinary shares of 1p each before that date.

Meanwhile, fans' group Sons of Struth say in a poll of their members there was overwhelming backing for the removal of Sandy Easdale as a Rangers director and for shareholder and Sports Direct owner Mike Ashley to cancel his seven-year contract for the naming rights to Ibrox.

These statements fell on the same day as the for the maximum period of 15 years after a court heard that his conduct in his dealings with the Ibrox club was "singularly shocking and reprehensible".

It was also revealed on Tuesday that a deal was struck to buy 4,265,000 Rangers shares at 20p each, although it is unknown who bought them and who sold them. The trade represents more than 5% of the club's shares.