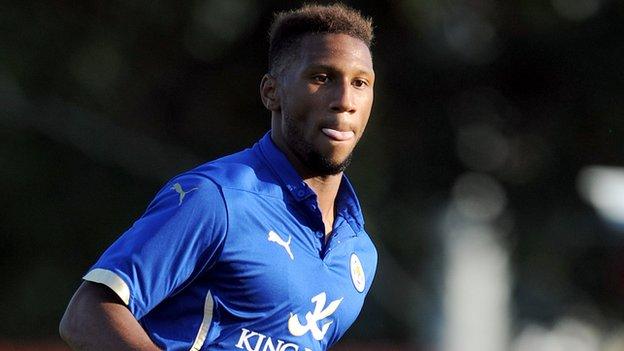 Leicester defender Alie Sesay has been invited to play for Sierra Leone in their Africa Cup of Nations qualifiers.

It is a first international call-up for the 21-year-old, who is eligible to play for both Sierra Leone and England, the country of his birth.

Newly-appointed Leone stars coach Atto Mensah has included Sesay in his squad to face Cameroon on 11 and 15 October.

"Sesay is a good defender, I believe in him and that's why I have invited him," Mensah told BBC Sport.

"I have spoken to Sesay and his mum and he has accepted to honour my invitation to play for Sierra Leone."

Sesay's selection comes despite the fact he has yet to play in Leicester's first team - he played for the development squad in an Under-21 Premier League match against Chelsea on Monday.

The right-back, who signed a professional contract last year, had a spell on loan at League One side Colchester United at the start of 2014 and made his debut in February but went on to make only two further appearances.

Sesay is one of 20 foreign-based players picked by Mensah for the upcoming matches, which will both be played in Yaounde as a ban remains in place on Sierra Leone hosting matches in their country because of fears over the Ebola outbreak.

"I decided not to invite any home-based players because there's no domestic competition going on in Sierra Leone at the moment because of Ebola," added Mensah.

Former Watford midfielder Alhassan Bangura, who is presently without a club, has been given his second call-up six years after he made his debut.

Bangura's only appearance for the Leone Stars was in October 2008 in a 4-1 defeat to Nigeria's Super Eagles in Abuja in a joint 2010 World Cup and Africa Cup of Nations Cup qualifier.

Finland-based goalkeeper Partrick Bantamoi, who was a member of the Sierra Leone team that participated in the 2003 Caf and Fifa U-17 championships in Swaziland and Finland, earns his first call-up to the senior squad.