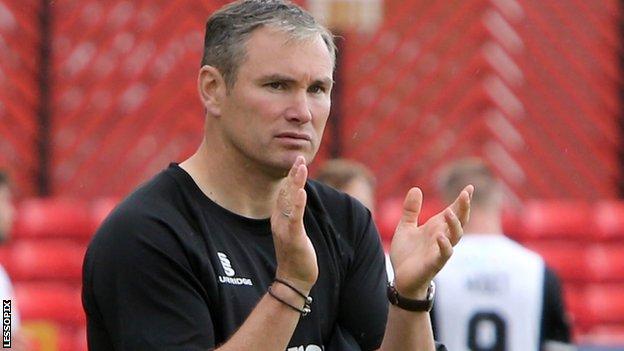 Manager Kevin Wilkin says Wrexham will not get carried away following the 1-0 win over Kidderminster Harriers in the Conference.

The Dragons moved up to third after Elliott Durrell's deflected shot secured a late victory.

It was Wrexham's second home win in four days and Wilkin hopes his side can maintain their run at Torquay on Saturday.

"No one's getting carried away. It's another three points," Wilkin said.

"We want to take another three points at a difficult game on Saturday and Halifax on Tuesday.

"We move on and hopefully perform a little bit better as a spectacle come Saturday."

Wrexham's victory over Harriers took them into the play-off places, a point above third-placed Torquay, who they face on Saturday.

Wilkin was pleased with his side's character and resilience against Kidderminster in a game that was heading for a goalless draw.

"To come through and show that bit of resolve in what was a difficult game and not a particularly pretty game, I'm delighted with," Wilkin added.

"That would do me fine but we know we've got areas to improve on and that's what we'll continue to work at."