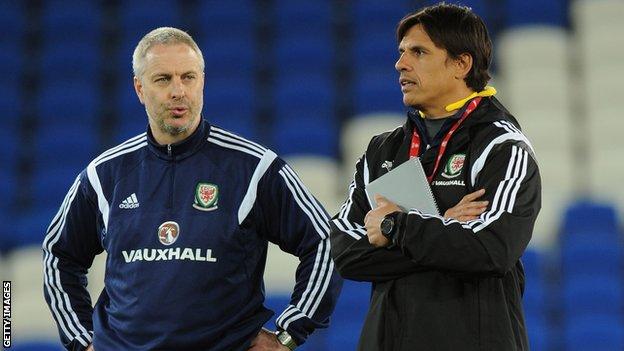 Chris Coleman says assistant Kit Symons will not be able to keep his job in Wales' coaching set-up if he is appointed Fulham manager.

Symons has been in temporary charge at Craven Cottage since Felix Magath's sacking and is favourite to succeed the German.

Ex-Fulham boss Coleman, who played alongside Symons at the club, would be disappointed to lose his coach.

"If he does get it he won't be able to do both," Coleman said.

"If he gets it I'll be delighted for Kit but I certainly don't want to lose him."

Basingstoke-born Symons has been combining his Wales role alongside his full-time job as Fulham Under-21 coach.

The 43-year-old took over as caretaker manager at the Championship club following the dismissal of German Felix Magath in September.

Fulham earned their second successive Championship win under Symons with a 4-0 victory over Bolton Wanderers on Wednesday night.

Symons says he wants the job permanently and Coleman, who was Fulham boss between 2003 and 2007, believes he would be the right man for the struggling side.

"I think he really wants the job and I'd like to see him get the chance," Coleman added.

"I think he would be good for Fulham. I think it's what Fulham needs, someone like Kit who absolutely loves the club at heart."

Coleman's side have back-to-back home matches against Bosnia-Hercegovina on Friday, 10 October and Cyprus three days later.

Wales started their campaign with an unconvincing 2-1 win in Andorra while Bosnia lost 2-1 at home to Cyprus.

But Coleman has warned second seeds Bosnia, a side they lost 2-0 against in a friendly in August 2012, will be tough opponents.

"Bosnia will be a wounded animal because they were expected to beat Cyprus," Coleman added.

"They should have beaten them, they completely dominated the game, but they couldn't score and were done twice on the counter-attack.

"They'll come to us, knowing they need to win and with a point to prove.

"But we've got the opportunity to put a bit of distance between us and them and it's all about getting the job done and continuing our good work."