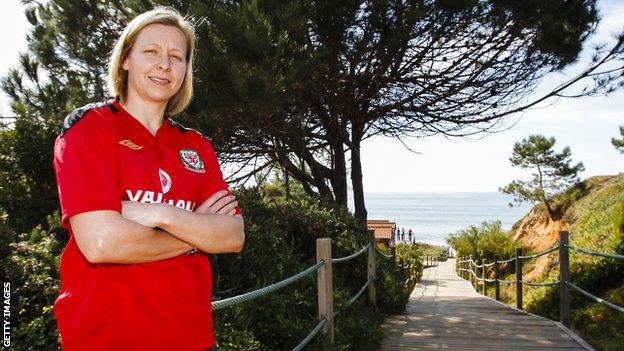 Ludlow is director of women's football and first-team manager at Reading.

She will remain at the club until her contract expires at the end of November 2014.

Rhondda-born Ludlow, succeeds Jarmo Matikainen, who is back in his native Finland after a successful four years in charge of Wales women's teams.

During her playing career she won nine Premier League titles, the FA Women's Cup six times and the Uefa Cup in 2007 with Arsenal.

She scored 19 goals in 61 appearances for Wales before retiring from international football in 2012.

Ludlow was appointed Reading's director of women's and girls football and first-team manager in August 2013. They play in the Football Association's Women's Super League Two.

Matikainen's side came close to reaching the play-offs for the 2015 World Cup finals in Canada, but lost 1-0 to Ukraine in their final group game.

The Finn also oversaw the first Uefa tournament to be held in Wales, the Women's Under-19 finals in the summer of 2013.