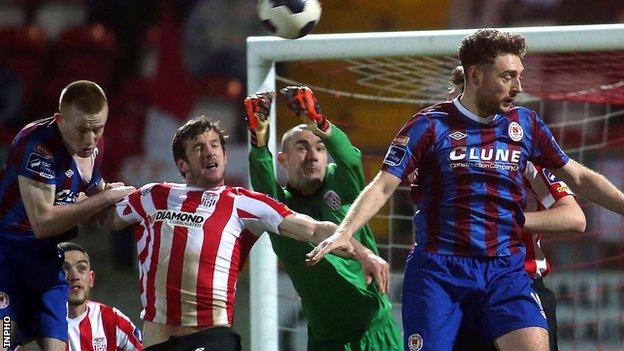 Derry City are sweating on the fitness of four players ahead of Sunday's FAI Cup semi-final against Shamrock Rovers.

"Overall it's been a disappointing season but this could be a fantastic way to finish it it off," said City manager Peter Hutton.

"It's a massive game in terms of what it could provide to the club."

He added: "We'll treat this as our final as it's all about getting to the Aviva Stadium for the decider - finals take care of themselves."

Pat Fenlon's Rovers side are 14 points ahead of the Candystripes in the league standings and they will also have home advantage on Sunday.

Derry have taken just one point in their last two visits to Tallaght and will start as underdogs in the last-four encounter.

"Being at home certainly gives them an edge - with 2,000 supporters it will be a cauldron of Rovers fans," said Hutton.

"We will have to channel that and use it as motivation for ourselves while there will be a few down from Derry, and I'm sure they will be very vocal.

"We will have absolutely no fear about going down to their place. It's a cup semi-final, it's there to be enjoyed and the players are looking forward to it.

"We're a young team and the vast majority of the players will go out to play as if they were in the street."

St Pat's Athletic take on First Division side Finn Harps in the other semi-final on Sunday.