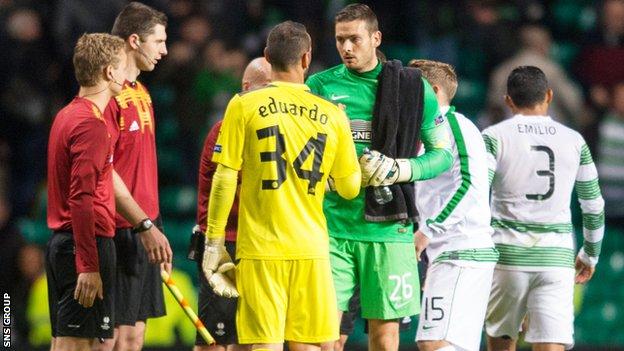 Gordon made three terrific stops as the home side protected an early goal from Kris Commons.

"Craig was unbelievable," said Deila. "We have him to thank for conceding zero goals and winning the game.

"In the end it was fantastic team spirit. We have to take that with us but we need better passing."

The only goal came in the sixth minute when Emilio Izaguirre's pass, Commons' dummy and Anthony Stokes' return ball set up the influential playmaker to slam home a precise finish.

In a first half chock-full of goalmouth incidents, visiting striker Wilson Eduardo hit the crossbar and had a fierce volley well saved, while a dreadful touch from Zagreb keeper Eduardo should have been punished, with Commons and Stokes in close attendance.

The Croatian champions dominated for long spells after the break but Gordon would not be beaten, thwarting Wilson Eduardo again and pushing away a shot from Marcelo Brozovic.

"Celtic have had good goalkeepers in the past and that is important," added Deila. "It is an important place to have good players.

"He was a prospect to come in before I was the manager but I knew he was a fantastic goalkeeper who was out for a long time with injury.

"He can't do much better than he has shown. He can work on his kicking but he is a fantastic keeper and very calm."

Celtic are on four points in Group D, along with Red Bull Salzburg, and one ahead of Dinamo Zagreb.

With a double-header against FC Astra, who are yet to get off the mark, to come next, Deila is confident of making progress.

"We have a good chance of getting the 10 points I think we will need," he said.

"It is important for us to test ourselves against good teams but we need to have longer periods like the first half."

Visiting head coach Zoran Mamic thought his side deserved to take something from an entertaining fixture.

"When you see the 90 minutes, we were the better team," he said. "But football is about goals and we didn't score, so I have to say congratulations to Celtic.

"In the last game against Astra, we didn't have as many shots on goal but won 5-1. I was sure we were going to score in the second half but it just didn't happen.

"I'm sure it will be better for us when we play Celtic in Zagreb. I think that could be a decisive game in the group and we showed we have the quality to beat Celtic."

Stokes, without a European goal in three years, led the attack for Celtic and his partnership with Commons provided the game with its decisive moment.

"It was a bit of a graft but we got there in the end with good team work," said the Irishman.

"I think I've always had a good understanding with Kris and before the ball even came to him I knew he was going to leave it and it was just a matter of me putting it into the space."