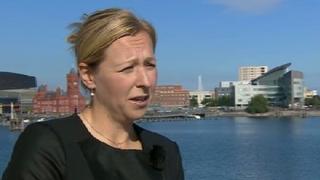 Wales women's new manager Jayne Ludlow says there is no reason why the team cannot reach the finals of a major tournament.

Former Wales captain Ludlow succeeds Jarmo Matikainen, who is back in his native Finland after a successful four years in charge of Wales women's teams.

Ludlow is currently director of women's football and first-team manager at Reading, where she will remain until her contract expires at the end of November 2014.