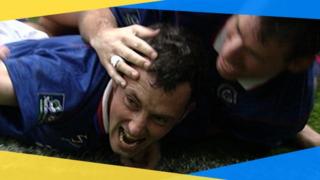 Big-spending Middlesbrough, complete with Italian Champions League winner Fabrizio Ravanelli and Brazilian pair Juninho and Emerson, looked to have finally quelled third-tier side Chesterfield's rebellion when defender Gianluca Festa put them 3-2 up in extra-time in the 1997 semi-final at Old Trafford.

The Spireites had led 2-0 against 10-man Boro after Vladmir Kinder's red card and had also been denied an apparently legitimate goal by referee David Elleray when Jonathan Howard's effort rebounded down off the crossbar with his side 2-1 up.

But there was a further twist in the tale. Just 65 seconds before the end of extra time, local boy Jamie Hewitt guided a looping header into the top corner from Chris Beaumont's cross to earn Chesterfield a replay.

Middlesbrough swept to a sobering 3-0 win in the replay, before losing 2-0 to goals from Roberto Di Matteo and Eddie Newton, against Chelsea in the final.