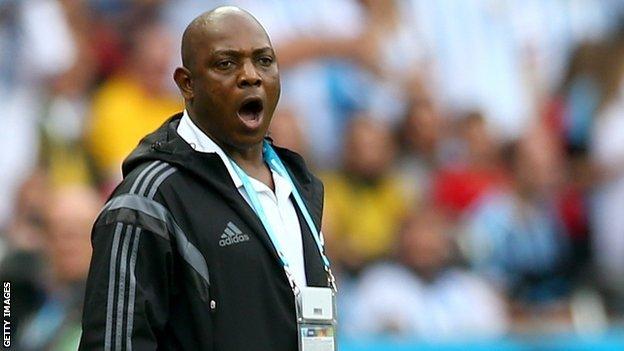 Stephen Keshi insists he is focused on taking charge of Nigeria for this month's Africa Cup of Nations double-header against Sudan despite having no contract in place.

The 52-year-old lost his permanent position after the World Cup but was brought back for the Super Eagles' last two matches.

He has had no word from the newly-elected Nigeria Football Federation (NFF) board, but says he will continue in the role.

"I've not heard from the new NFF board because elections only happened on Tuesday so it is not a problem.

"My immediate focus is on the important matches against Sudan this month because it is very crucial for us to win both games."

Keshi, who led Nigeria to their third African title in 2013 and the last 16 in Brazil, must lead his side to a recovery after their poor start to qualifying for next year's tournament in Morocco.

Following a defeat by Congo and a draw with South Africa, the Super Eagles are third in Group A, with only the top two teams guaranteed a place at the finals.

And local media reports suggests the back-to-back fixtures against Sudan will decide whether the former Nigeria captain will earn a new contract or not.

"I have named a squad strong enough for these games and the plan is to get the players together early enough to prepare," said Keshi.

"We can't bother ourselves with the speculations in the media. When you take care of business on the pitch then other things will be secondary."