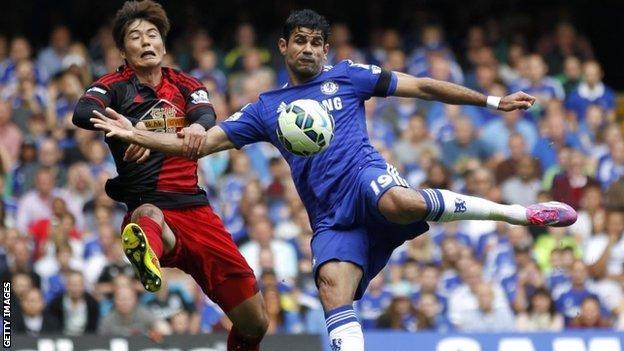 Arsenal boss Arsene Wenger says Diego Costa is "a killer" and admits the Chelsea striker is a big threat to his team in Sunday's Stamford Bridge game.

Both clubs are unbeaten in the league, although Chelsea are six points above the Gunners.

"Costa has the aspects that you like. He is focused, always determined and ready for a fight," Wenger said.

"He has done fantastically well and he is a very efficient player.

"The timing of his runs and his determination, his killing determination - you feel he is a killer, he has that in him when in front of goal."

Wenger still feels confident that the Gunners can upset a Chelsea team at the top of the table with 16 points from a possible 18.

"You have to find a balance between nullifying their strengths, but without forgetting to express your strengths," said Wenger, who has yet to beat Chelsea boss Mourinho in 11 previous encounters.

"It is very important that we concentrate on having a great determination, a great desire and a great hunger and to focus on the way we want to play."

Mourinho is expecting a tougher test this time and says he is relishing the contest.

"They will always be a difficult opponent but I like it difficult," he said.

It will be an emotional day for Cesc Fabregas, who played for Arsenal from 2003 to 2011 and made 303 appearances for the club.

He joined Chelsea in the summer after three years at Barcelona, and Mourinho says he has settled in well.

"I think he loves Chelsea already," Mourinho said. "He's so happy: the way he plays, the way he's a member of the squad, the way he lives in this little blue village.

"He doesn't forget Arsenal and he'll never lose his respect and his connection with the club but if you ask him now if he regrets his move here, I'm sure he'd say no."