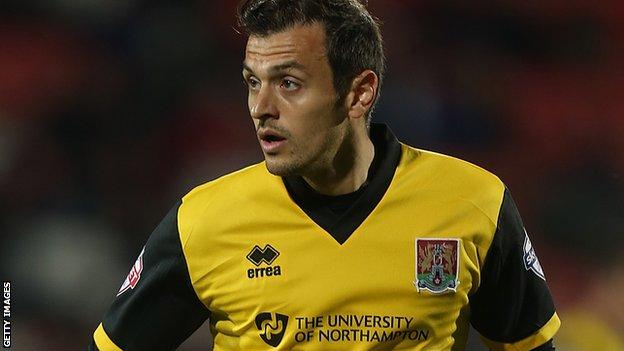 The 26-year-old joined the Grecians on a short term deal in September, scoring one goal in six appearances.

Cobblers boss Chris Wilder told BBC Radio Northampton: "He's been away and done great. It's no coincidence that they've got results as well.

"We never thought we'd keep him out there for three months. He'll come and be involved [versus Portsmouth]."

The former Burton and Walsall forward scored the winner in Exeter's 2-1 win at Cambridge, and they have won four times and drawn once in the six games Nicholls has been involved.

Northampton's top-scorer Marc Richards is returning from a hamstring injury, whilst Emile Sinclair has not featured since late August after picking up an ankle injury.

"It's important we keep the group strong. We've got a few coming back, which will be good for the group, and hopefully Alex can come back and pick up from his performances at Exeter."