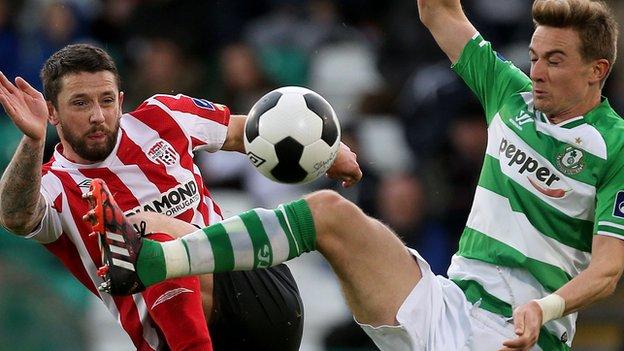 The former Northern Ireland striker headed in an 86th-minute equaliser for Derry who will have home advantage for Tuesday's semi-final replay.

Rovers had taken the lead on their own Tallaght Stadium pitch in the 78th minute through a Dean Kelly shot.

The winners will play St Patrick's Athletic in the final on 2 November.

St Pat's booked their place in the Aviva Stadium showpiece by hammering Finn Harps 6-1 earlier in the day.

Derry's best crack at the Shamrock Rovers goal in the first half came early on when Michael Duffy's strong shot was turned away by home keeper Barry Murphy.

It was a cagey match with both sides exercising a cautious approach but it finally came alive when Rovers substitute broke the deadlock.

A ball in from the right by former City man Simon Madden came off Derry midfielder Philip Lowry and Kelly's shot found the net although keeper Gerard Doherty got a touch on it.

It looked like Rovers were going to get their first ever FAI Cup win over Derry - until Patterson headed in the late leveller.

City substitute Mark Timlin delivered a corner from the right and Patterson met it at the near post with a glancing header which went in off the far upright.

Derry, cup winners in 2012, almost snatched a stoppage-time winner when Patterson set up Duffy but the close-range shot was superbly blocked by keeper Duffy.