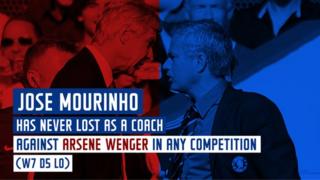 BBC Sport looks at some of the key statistics from the weekend's games in the Premier League, with Jose Mourinho maintaining his unbeaten run against Arsene Wenger thanks to Chelsea's 2-0 win over Arsenal.

Manchester United recorded their third successive home win in the Premier League with a 2-1 win over Everton, and Newcastle rescued a point away at Swansea courtesy of Papiss Cisse's two goals.

Sunderland's Steven Fletcher also scored twice in his side's 3-1 win over Stoke at the Stadium of Light, and Michael Kightly ended Burnley's run of 565 minutes without a league goal in a 2-2 draw at Leicester.