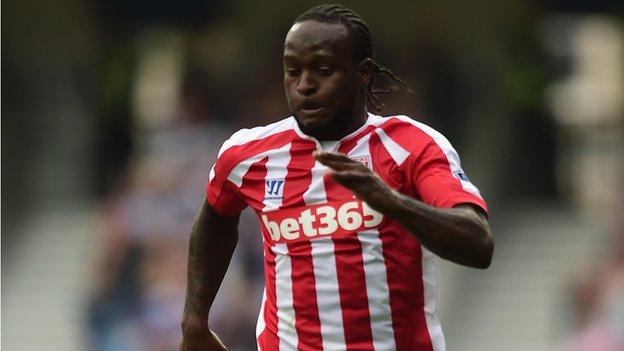 Nigeria forward Victor Moses will miss this month's Africa Cup of Nations qualifiers against Sudan after a recurrence of a thigh injury.

The 23-year-old was forced off after only 18 minutes of Stoke's 3-1 defeat at Sunderland on Saturday.

Stoke boss Mark Hughes said Moses will be sent for "more tests during the international break".

The new injury setback will come as a big blow for Moses, who has not played for the Super Eagles since the second round 2-0 loss to France at the World Cup in Brazil.

Out-of-contract Nigeria coach Keshi overlooked Moses for the shock 3-2 home defeat to Congo and the goalless draw in South Africa last month, saying the player was off form.

But he brought him back as Nigeria aim to recover from a poor start to qualifying for Morocco that has left them third in Group A, with only the top two teams guaranteed a place at the finals.

He will join up with the camp in Abuja, where the home-based players gathered on Sunday. Nigeria's foreign-based stars are expected in camp from Monday.