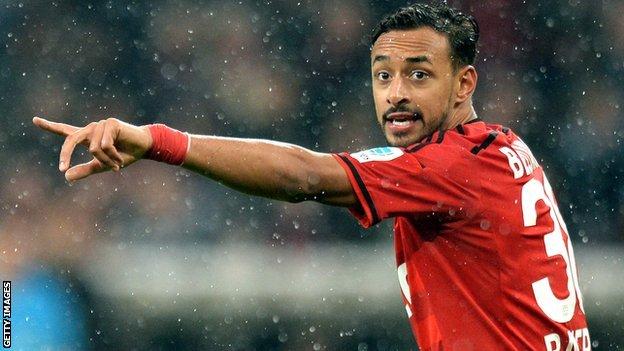 African countries seeking to strengthen their squads for the Africa Cup of Nations from the ranks of European-born talent have been handed multiple brush-offs over the last days.

Bids to convince several exciting new players to pledge their international futures to the African country of their ancestry have been headed off in what could be the start of a more proactive approach from Europe to guard against poaching of their prospects.

World champions Germany last week called up Karim Bellarabi (pictured)to their squad for their Euro 2016 qualifiers in Poland and at home to Ireland, effectively ending a bid by Morocco to have him play for them.

The Bayer Leverkusen attacker, who scored the fastest goal in Bundesliga history on the opening weekend of the season, had met with Morocco coach Badou Ezaki last month as the north Africans looked to strengthen their team for the hosting of next January's Nations Cup.

The 24-year-old Berlin-born player has a Ghanaian father and Moroccan mother and is representative of a new generation of multi-national footballers scattered across the top leagues of Europe who have more than one option at national team level.

Many African countries have aggressively scoured Europe for players with family connections, none more so than Algeria who had more French-born players than locals in their squad at the World Cup in Brazil earlier this year.

But their latest target has turned them down with Lyon midfielder Nabil Fekir opting for a first call-up from the France Under-21 squad rather than a chance to play for Algeria in two Nations Cup qualifiers over the next week.

The 21-year-old, born in Lyon, was called up first by Algeria last week but a day later received a call-up from the French for the European championship play-off against Sweden on Friday and on Tuesday, 13 October.

He told the sports daily L'Equipe it had been a difficult choice: "It is one I hope I do not regret."

Ivory Coast, who lost their last match 4-1 to Cameroon last month, hoped to strengthen their attack for their qualifiers on Saturday and next week with the 20-year-old French-born Thomas Toure, inviting him to their squad just four days after his first Ligue 1 goal for home town club Girondins Bordeaux.

But Toure, touted as one of the revelations of the new French league season, turned down the chance to try and fill the vacancy left by the retirement of Didier Drogba, saying he needed time before making a firm commitment, according to the Ivorian Football federation.