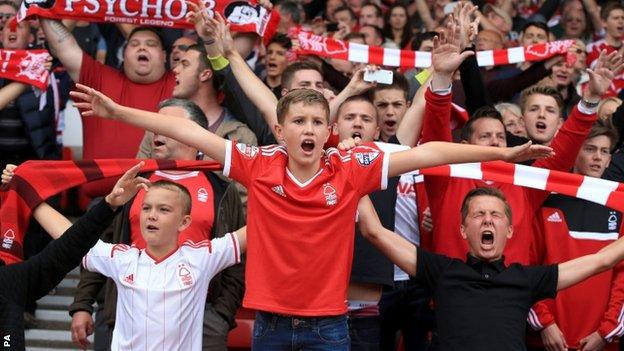 Which Championship club has the cheapest season ticket in England's top four divisions?

Where can an adult buy a match-day ticket in English football's second tier for only £10?

Find out in the BBC's Price of Football study.

We contacted 207 clubs in 21 divisions across British and European football, including the Conference Premier and Women's Super League, to discover how much it costs supporters to follow their football team.

Have prices gone up?

Not across the board. The price of the average cheapest adult season ticket in the Championship has come down 1.3% since 2012 to £342.70.

However, the average price of the most expensive season ticket has risen 5.6% in the same period to £573.50.

The Championship is the only league in English football's top four divisions to have seen a fall in the average price of the cheapest match-day ticket since 2011, dropping 3.2% to £19.73.

In the same time, the average price of cheapest match-day tickets across England's top four divisions rose 13% to £21.49.

The Premier League is the only one of England's top four divisions in which the average price of the cheapest season ticket has increased since 2012, rising by 8.7%.

The average price of the cheapest season ticket in England's top four divisions is £343.11, up 4.1% from last year but fractionally down since 2012.

So who's the cheapest?

There is plenty of value at The Valley. At £150, Charlton's cheapest season ticket cannot be bettered in England's top four divisions, while Blackpool, at £195.30, also come in at under £200.

Only one Conference club can beat Charlton's price - and that's Eastleigh, who charge £105.

In Europe, you can do even better, with Sporting Lisbon offering a season ticket for about £55, the cheapest of the men's clubs we contacted.

Even Barcelona charge as little as £103 for a season ticket.

Who charges just £10 for an adult ticket?

Their £10 match-day ticket - for specified matches - is the cheapest in the top four divisions of English football and is only matched by Conference side Southport.

Fulham have the costliest match-day ticket in the Championship at £45.

Arsenal have Britain's most expensive adult match-day ticket at £97, while their priciest season ticket is £2,013.

Reading have held their prices since 2008 and Cardiff City offer a family ticket for two adults and two children for £40.

Carlisle United and Huddersfield Town are the only English men's clubs to charge £2 for a programme, with the latter now producing a newspaper in order to cut down on the cost of glossy printing.

Almost £50 for a replica shirt?

Blackburn Rovers charge the most in the league for an adult replica shirt bought from the club shop. At £49.99, they cost more than those sold by 11 Premier League clubs.

Middlesbrough's junior replica shirts are the most expensive at £38.

Cardiff City sell the cheapest adult and child replica shirts in the league, at £38 and £28 respectively, with further discount for season-ticket holders.

On the continent, Roma charge the most for an adult shirt at around £67.

Brighton & Hove Albion. The south-coast club charge £4.10 for theirs, more than any other club in England's top four divisions.

Conference side Kidderminster charge even more, with a pie at Aggborough costing £4.50.

Wigan sell the cheapest pie in the division, charging £2.40.

And the cheapest pie sold by the clubs we contacted?

Conference side Braintree and Women's Super League outfit Sunderland Ladies both offer one for just £1.

A day out at the football

Derby County operate a system known as "demand-based pricing" which can see the price of a ticket fluctuate during its time on sale depending on demand for seats.

The Rams can be seen for as little as £10 and, when that is added to the cost of a cup of tea, pie and programme, a day out at the iPro Stadium comes in at just £18.

That seems cheap, but Sheffield Wednesday offer a day out for £17.80.

The two most expensive days out belong to southern clubs, with Fulham charging £33.90 and Brighton & Hove Albion the league's dearest at £34.70 - although Brighton's ticket price includes public transport by bus, train or park and ride to and from the stadium within the travel zone.

How much for a cup of tea?

Brentford offer the cheapest cup of tea in the Championship, at £1.50, with Watford not far behind at £1.60.

Birmingham and Blackburn fans aren't so lucky, having to pay £2.20.

The most expensive cup of tea in Britain can be bought at Liverpool, Manchester United and Southampton, who all charge £2.50.

How much do you pay per goal?

Based on the amount clubs charged for their cheapest season ticket last season, Derby County fans got the best value for money when it came to goals scored at home by their own side.

Each Derby goal at Pride Park set Rams supporters back £5.

Compare that to Norwich, where Canaries fans paid £29.38 for each goal scored by the home side at Carrow Road as they suffered Premier League relegation last season.

At Scottish League Two side Albion Rovers, each goal cost you £3.04.